Note: This page is for major league infielder Miguel Rojas, for others with similar names, click here. 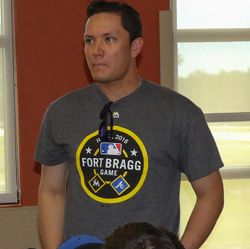 Miguel Rojas is an infielder who made his major league debut in 2014.

During the 2012 Caribbean Series, Rojas joined the Tigres de Aragua and put on a strong effort. He hit .389/.500/.444 and was named the All-Star shortstop; the line is even more impressive as the 2012 Series was a pitcher-dominated affair. Of the tourney's All-Stars, only outfielder Jesus Feliciano had a better OPS and no one had a better OBP.