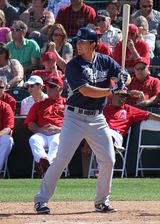 Dickerson hit .354 as a high school junior. In 2008, the senior batted .455/.522/.851 to win All-State honors in California. He led his team to the #11 ranking in the country (as per Collegiate Baseball). The Washington Nationals took him in the 48th round of the 2008 amateur draft but he continued on to college.

As a college freshman, Dickerson hit .370/.426/.618 with 14 home runs, 45 runs and 57 RBI in 58 games. He set Indiana University freshman records for both home runs and RBI. He was named Big Ten Conference Freshman of the Year, the first Indiana player to take that honor. He was named Freshman All-American by Collegiate Baseball; Baseball America picked him second-team at DH behind Troy Channing.

In 2010, the sophomore tore the cover off the ball to the tune of .419/.472/.805 with 19 doubles, 24 home runs, 62 runs and 75 RBI in 55 games. He won the Big Ten Triple Crown and also led with 99 hits. He was named the Conference Player of the Year, the first player in Big Ten history to do so the year after being Freshman of the Year. He was 7th in NCAA Division I in home runs (tied with Jeremy Baltz), 7th in total bases (190), 8th in slugging (.004 ahead of Anthony Rendon), tied for 19th in hits, 24th in average and tied for 28th in RBI. He was named to the All-American outfield by both Collegiate Baseball (along Gary Brown and Chad Oberacker) and the American Baseball Coaches Association (joining Brown and Chris Duffy). He was third team on the Baseball America list.

Assigned to the Cape Cod League, he was amazing for the Wareham Gatemen, going 17 for 34 with 4 doubles and a homer in a pitcher-friendly league. He joined Team USA's college edition for the rest of the summer but had middling numbers (9 for 36, 2 2B, HR, 5 BB). In the 2010 World University Championship, he saw limited action for the Silver Medalists, going 1 for 4 while backing up Mikie Mahtook, George Springer and Jackie Bradley Jr.

As a junior in 2011, Dickerson fell to .367/.440/.540 with 9 home runs and 49 RBI in 54 games while battling back problems (he had back surgery back in high school as well). He was All-Conference at DH and finished tied for first in Indiana history in home runs. Baseball America ranked him as the 42nd-best prospect in the nation but he fell to the third round of the 2011 amateur draft before the Pittsburgh Pirates took him. It was an unusual selection for Pittsburgh, which had shied away from power-hitting college players in recent years. He was Pittsburgh's third selection of 2011, following Gerrit Cole and Josh Bell. He was the 91st overall selection and first of the third round. The scout was Jerry Jordan.

Dickerson made his pro debut on June 16, 2011, with the State College Spikes, going 1 for 4 with a double as the DH and #3 hitter in a 7-0 loss to the Williamsport Crosscutters. He had State College's only hit further than a single that day. He played 41 games for State College that year, hitting a solid .313/.393/.493 with 25 runs and 16 doubles. Had he qualified, he would have been 5th in the New York-Penn League in average, 8th in OBP and 5th in slugging. He played exclusively at first base. Baseball America named him the league's #11 prospect.

In 2012, he moved up to the Bradenton Marauders of the Florida State League and had another outstanding season that led to his being named the league's Player of the Year and All-Star 1B. In 129 games, he hit .295/.353/.451, with 144 hits, 31 doubles, 13 homers and 90 RBIs while playing 109 games at 1B. He was among the FSL leaders in average (7th, between Josmil Pinto and Mark Canha), slugging (9th, between Cory Vaughn and Wade Gaynor), hits (144, 3rd, between Ramon Flores and Danny Santana), doubles (4th, between Marcus Knecht and Flores), homers (tied for 7th with Knecht, Lance Ray and Anthony Hewitt), total bases (220, 3rd, behind Marcell Ozuna and Jim Murphy), RBI (2nd, 5 behind Ozuna) and double plays at 1B (107, 1st). He was 4th in the Bucco chain in average (between Alen Hanson and Matt Curry) and led in RBI (5 ahead of Gregory Polanco). Baseball America named him the best defensive first baseman in the FSL and as Pittsburgh's #11 prospect but did not put him down as one of the FSL's top 20 prospects (teammates Cole, Jameson Taillon and Gift Ngoepe all made the list).

In 2013, he was switched to right field as he moved up to the Altoona Curve of the AA Eastern League. This time he was the circuit's Rookie of the Year, producing at a .288/.337/.494 clip in 126 games. He continued to show good power, with 36 doubles and 17 homers, scored 61 runs and drove in 68. The main downside was that he drew only 27 walks. He was among the EL leaders in average (10th), slugging (3rd between Allan Dykstra and Caleb Joseph), OPS (6th, between Joseph and Carlos Moncrief), doubles (2nd, one behind Javier Herrera) and total bases (223, 5th, between Moncrief and Michael Almanzar). Among Bucco minor leaguers, he was third in doubles (one behind Bell and Matt Hague), 4th in homers (behind Andrew Lambo, Stetson Allie and Jarek Cunningham) and third in total bases (behind Lambo and Allie). He was named to the EL All-Star outfield alongside Moncrief and Herrera.

On November 25th, the Pirates sent him to his hometown team, the San Diego Padres in a trade for another prospect plus a reliever with some MLB experience in OF Jaff Decker and P Miles Mikolas.

Alex started the 2015 season in the minor leagues, suiting up for the El Paso Chihuahuas of the Pacific Coast League. In 125 games, he hit .307/.374/.503, with 36 doubles, 9 triples and 12 homers. He scored 82 runs and drove in 71. He was called up to san Diego to make his major league debut on August 6th, when he pinch-hit for Dale Thayer in the 8th inning of a 10-1 loss to the Milwaukee Brewers. He lined out to deep right against Michael Blazek. He collected his first major league hit the next day, in another pinch-hitting appearance. It was a single against Hector Neris in the bottom of the 11th inning of a game against the Philadelphia Phillies. he was pinch-hitting for Shawn Kelley with two outs an no one on base, and then was stranded when Alexi Amarista hit a ground ball for the final out. He was then sent back down to El Paso and only came back when rosters expanded in September. He played another 9 games, only once taking the field as a defensive replacement in left field, the other appearances all coming as a pinch-hitter. He went 2 for 8 overall, with 3 strikeouts and no extra-base hits.

He was still an afterthought heading into the 2016 season and put on the Chihuahuas' uniform once again when the season began. He was called up to San Diego in early May, but again saw only limited use, starting one game in left in two weeks and being limited to pinch-hitting duty otherwise. He went 2 for 10 before heading back to AAA on May 13th. He did have one major highlight: on May 10th, he connected for a pinch grand slam off Adam Warren in a 7-6 loss to the Chicago Cubs. His next call-up was a different story, though. He returned to San Diego on June 28th and was immediately inserted into the starting line-up in left field. He was not doing much for a while until he suddenly went deep in four consecutive games from July 24-27. His home run streak contributed to the Padres setting a team record by homering in 25 straight games. He hit .257 in 84 games, with 20 homers and 37 RBIs, good for an OPS+ of 112, while playing mainly in left field.

But just as he was getting established in the majors, Alex missed two entire season, not appearing in even a minor league game in 2017 and 2018. The first year, he was sidelined by back problems and eventually had to undergo surgery at the end of June to remove a bulging disk, then in 2018 he underwent Tommy John surgery during spring training, missing the entire year again. He was finally healthy in 2019, but hardly played in the early going, going 3 for 19 in 12 games before he was traded to the San Francisco Giants for Franklin Van Gurp on June 10th. He was added to the Giants roster on June 21st and quickly went on a tear, as he hit .375 the rest of June, and .393 in 20 games in July, coinciding with the Giants winning 19 of their 25 games during the month. However, he cooled down after that, hitting below .200 for the final two months and seeing his playing time decrease as a result. Overall, he played 68 games that season and hit .276 with 6 homers and 28 RBIs. In spite of the roller coaster year he had, his OPS+ was a good 115.

He was back in the Giants' starting line-up in 2020 and while teammate Mike Yastrzemski who was grabbing headlines with his unbelievable play in the first month, he was scuffling, batting just .221 with 4 homers and 14 RBIs through the end of August. Then on September 1st, he had a monster game against the Colorado Rockies at Coors Field. He homered into the third deck off Jon Gray in the 1st inning, a titanic blast measured at 480 feet, then hit another long ball off Gray in the 2nd for his first career multi-homer game. He hit a double in the 4th, then homered for a third time in the 6th, this time against Jairo Díaz. But he still wasn't done, as he drew a walk, then hit another double, this one off position player Drew Butera, in the 9th. That blast traveled 414 feet and would have been another homer in every ballpark except for Coors. He ended the night at 5 for 6, with 5 runs scored and 6 RBIs, one of three Giants players to drive in 6 runs that night, alongside Donovan Solano and Brandon Crawford. The Giants won the game, 23-5, tying team records for runs and hits (27) in the process, and setting a new record for extra-base hits with 13. He was only the 12th player in history with 5 extra-base hits in a game, and the third with a combination of three homers and two doubles, all three instances having occurred in the past five years, with Kris Bryant in 2016 and Matt Carpenter in 2018 being the others.