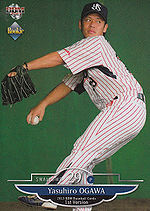 Yasuhiro Ogawa was a Rookie of the Year in the Central League. He is nicknamed Ryan because his style is similar to that of Nolan Ryan.

Ogawa went 36-3 with a 0.60 ERA in college, with a New Tokyo University Baseball League-record .12 ERA one season. The Yakult Swallows took him in the second round of the 2012 draft. He was chosen for the CL All-Star team and won one of the All-Star Games. He was just the 8th rookie in Nippon Pro Baseball history to do so and the first since Koji Uehara in 1999. He was the youngest Yakult hurler to win an All-Star Game since Masaichi Kaneda in 1957. Ogawa got his first hit April 10 off Brad Bergesen and his first RBI May 11 on a double off Minoru Iwata. He finished the year 16-4 with a 2.93 ERA. No rookie in NPB had won 15+ games since Uehara and Daisuke Matsuzaka back in 1999. He was only the second Swallows rookie ever to win 15+ games, following Yoshio Kitagawa in 1959. He led the CL in wins, one ahead of Kenta Maeda, and also finished among the league leaders in ERA (5th, between Randy Messenger and Tomoyuki Sugano), complete games (4, 3rd, 2 behind Messenger and Atsushi Nohmi), shutouts (3, tied for first with Messenger), innings (178, 3rd behind Messenger and Nohmi), hits allowed (155, tied for 7th with Nohmi) and strikeouts (135, 7th, between Kazuki Mishima and Nohmi). Amazingly, his 16-4 record came on a last-place team. He was the runaway winner of the 2013 Central League Rookie of the Year Award winner, with 252 votes to 13 for Tomoyuki Sugano and 8 for the more heralded Shintaro Fujinami. He also finished 8th in voting for the 2013 Central League Most Valuable Player Award, between Tetsuya Yamaguchi and Sugano.

Ogawa made Japan's squad for the 2015 Premier 12. He took the hill once for the second-place finishers. Against the Dominican national team, he relieved Shota Takeda in the 5th with a 2-0 lead. After two scoreless innings, he served up a double to Teoscar Hernández in the 7th and a homer to Ronny Rodríguez. Yasuaki Yamasaki relieved after Japan had retaken the lead in the 8th and Ogawa got the win, Yuki Matsui saving it for him.

In 2016, Ogawa was 8-9 with a 4.50 ERA. He tied for 8th in the CL in losses, again served up the most dingers (22, one more than Kenta Ishida) and was 3rd with four complete games (behind Sugano and Shun Yamaguchi). He made the CL team for the 2017 NPB All-Star Games. In Game 1, he relieved Shoichi Ino in the 7th with a 2-0 deficit. He served up a homer to Daichi Suzuki then got Shohei Otani on a fly, fanned Nobuhiro Matsuda, allowed a single to Shogo Akiyama and retired Hideto Asamura. For the 2017 season, he went 8-7 with a 2.83 ERA. Had he qualified, he would have been 5th in the CL in ERA, between Yusuke Nomura and Shota Imanaga.

On August 15, 2020, he threw a no-hitter against the Yokohama BayStars. He was the 4th Swallows hurler to throw a no-no, following Terry Bross, Kazuhisa Ishii and Rick Guttormson; it had been 14 years since Guttormson's.