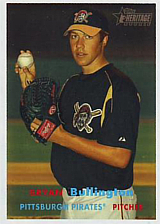 "NEW YORK -- The Pittsburgh Pirates know No. 1 draft pick Bryan Bullington still needs some work. 'We still look at him as a couple of years away,' general manager Dave Littlefield said after taking the Ball State right-hander with the first pick in Tuesday's draft. 'On the plus side, that may mean... he'll be an even better pitcher than we see now.' Bullington, who throws a 94 mph fastball, is the first pitcher drafted with the top pick since Detroit took Rice right-hander Matt Anderson in 1997 amateur draft. Littlefield envisions Bullington as a No. 3 starter, evidence of the lack of star talent in this year's draft. 'We're talking about a guy who has accomplished a lot in his college career,' Littlefield said. 'He's improved a lot and, beyond the radar gun and the things that are easy to measure, he's a smart guy, he's very competitive and very determined.'" - Associated Press wire, June 5, 2002

Bryan Bullington was merely one in a long line of misfires during Dave Littlefield's time at the helm of the Pittsburgh Pirates.

As a high schooler, Bryan was chosen Indiana's "Mr. Baseball". He attended Ball State, where he became the school's all-time leader with 29 wins and 367 strikeouts. Following his junior year, where he went 11-3 with a 2.84 ERA and 139 strikeouts, winning MAC Pitcher of the Year honors, he was chosen by the Pittsburgh Pirates with the first pick in the 2002 draft. He was considered a signability pick and the Pirates were widely derided for choosing him, especially once he failed to stand out in the minors. He was signed by scout Duane Gustavson.

Bullington never emerged as even a #3 guy with the Bucs. He made a rough debut at the end of the 2005 season (2 earned runs in 1 1/3 innings), at which time it was discovered his shoulder was in such disarray that he needed surgery to repair his labrum, costing him all of 2006. After an 0-3, 5.29 run in 5 games in 2007, he was designated for assignment in 2008 and claimed by the Cleveland Indians, for whom he was 0-2, 4.91 in 3 late season games. Signed by the Toronto Blue Jays after the season, he was brought up in mid-April 2009 when the Jays ran into a spate of pitching injuries, but was sent back to AAA Las Vegas on May 1 in spite of posting a decent 3.00 ERA in his short stint. On May 16, 2010, Bullington became the first player promoted to the Kansas City Royals by interim manager Ned Yost and finally picked up his first major league win on August 15, pitching 8 innings of two-hit, shutout baseball to give the Royals a 1-0 win over the New York Yankees. And... that was it. In 26 games as a big leaguer, 10 starts, Bryan finished 1-9 with a 5.62 ERA, 31 walks and 54 strikeouts in 81 2/3 innings.

While Bryan never became that #3 starter Dave Littlefield envisioned, several young men who may have signed with the Pirates if chosen did blossom into #3s or better elsewhere, including and not limited to Zack Greinke, Scott Kazmir, Cole Hamels, Matt Cain, Jon Lester, Rich Hill and Josh Johnson.

Done with baseball in the States, Bullington signed with the Hiroshima Carp for 2011. He debuted on April 14 with 8 shutout innings against the Hanshin Tigers - he did allow seven hits and two walks, while fanning seven. He was relieved by Dennis Sarfate, who blew the shutout bid, but Bullington still got a win. Bryan enjoyed some success in his five seasons in Nippon Pro Baseball, split between Hiroshima and the Orix Buffaloes, ultimately finishing 45-45 with a 3.25 ERA in 758 innings.

Bryan's wife's name is Lauren, and they have one daughter, Isabella, born September 4, 2006. Athleticism runs in the family; in 1984, his father Larry was inducted into the Ball State Athletic Hall of Fame as a star in both basketball and baseball.