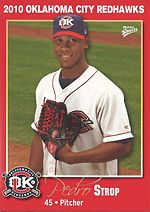 Pedro Strop was signed by scouts Rolando Fernandez and Felix Feliz for the Colorado Rockies in 2002. He debuted as a shortstop for the DSL Rockies that summer. He came stateside with the Casper Rockies in 2003.

In 2006 Strop was back in Casper, this time in his pro debut on the mound. After 8 games with a 2.57 ERA in AA in 2008, Strop was released by the Rockies in September. He was signed by the Texas Rangers in December and made his debut for the Rangers in 2009.

On September 1, 2011, Strop was the player to be named later in the August 31st trade that sent Mike Gonzalez from the Baltimore Orioles to the Rangers. He put up an 0.73 ERA for Baltimore in 12 September outings that season. He had an excellent season out of the O's bullpen in 2012, pitching 70 times as a set-up man for closer Jim Johnson, with an ERA of 2.44. He had a record of 5-2 and recorded 3 saves while pitching 66 1/3 innings. The Orioles surprised everyone by making it to the postseason that year, and Strop made a couple of solid outings in the ALDS against the New York Yankees. He pitched 2 1/3 innings, allowing only a hit and walk, while striking out a pair of batters, but Baltimore was defeated in five games.

Strop's good performance in 2012 led to a selection with the Dominican Republic national team in the 2013 World Baseball Classic. He was one of the team's bullpen mainstays, setting the table for closer Fernando Rodney as the Dominicans swept their way to a tournament title. He was credited with three wins -the most in the tournament - and two holds, allowed no earned runs in 6 2/3 innings with a WHIP of 0.45. However, once the 2013 season started, he was not as sharp. On July 2nd, his record stood at 0-3, 7.25 in 29 games when he was traded to the Chicago Cubs, along with fellow pitcher Jake Arrieta, in return for starter Scott Feldman.

Installed as the Cubs' closer after Jose Veras faltered in the early going in 2014, Strop spoiled the party on April 23rd when the team put on an elaborate celebration to mark the 100th anniversary of the first major league game played at Wrigley Field. He came on in the top of the 9th inning to hold a 5-2 lead against the Arizona Diamondbacks, but fell apart, giving up a lead-off walk to Chris Owings, then Tony Campana reached on an error by SS Starlin Castro. Strop walked pinch-hitter Eric Chavez to load the bases, but struck out Gerardo Parra for the first out; Martin Prado followed with a two-run single on a ball that deflected off the second base bag, with A.J. Pollock, running in place of Chavez, going to third. The Cubs still led, 5-4, at that point, and Strop struck out the dangerous Paul Goldschmidt for out number two. Manager Rick Renteria decided to bring in lefty James Russell to face Miguel Montero, but the strategy backfired when Montero singled, tying the game; Justin Grimm then came out to pitch, but he gave up a two-run triple to Aaron Hill as RF Justin Ruggiano tripped on the bullpen mound, injuring himself. The D-Backs won the game, 7-5.

Strop got to play an inning in left field on June 28, 2016, being put there after the Cubs had taken a 7-2 lead over the Cincinnati Reds in the top of the 15th inning after running out of available position players. Even more unusual, he was the third pitcher to man the position in the game: Travis Wood had been inserted there in the 13th inning, as part of a double switch, and then had switched position with P Spencer Patton after one out in the 14th in order to face one batter, Jay Bruce, which he retired. Patton then returned to to the mound to complete the inning, but he was replaced by a pinch-hitter - pitcher Jason Hammel - in the top of the 15th as the Cubs scored five runs. Wood completed the game on the mound, while Strop stood in left; his prayers that no ball would be hit his way were successful. He was having a solid season as a set-up man for Hector Rondon and then Aroldis Chapman, with a 2.89 ERA and 21 holds after 50 games when he went on the disabled list on August 11th, the result of injuring his left knee knee on a fielding play the day before. His meniscus was torn and he required arthroscopic surgery, although he was hoping to return before the end of September. Indeed, he returned on September 23rd, just in time to be on the postseason roster. He finished the year at 2-2, 2.85 in 54 games. He then pitched 8 times in the postseason, giving up just 2 runs in 5 2/3 innings, both in the NLCS against the Los Angeles Dodgers. He contributed 2 scoreless innings to the Cubs' win over the Cleveland Indians in seven games in the 2016 World Series.

In 2017, he was a set-up man for new closer Wade Davis, going 5-4, 2.83 in 69 games and 60 1/3 innings, during which he struck out 65 batters. The Cubs returned to the postseason and he pitched 5 times in relief, allowing 1 run in 5 1/3 innings as the Cubs lost to the Dodgers at the NLCS stage. He was back in a similar role at the start of the 2018 season, this time backing up closer Brandon Morrow after Davis had left via free agency. However, Morrow was injured in mid-July, Strop took over for him and did well. He had 13 saves on September 13th when he was injured himself, pulling a hamstring muscle while batting in extra innings in a game against the Washington Nationals. He received credit for the win that day, improving his record to 6-1, to go along with an ERA of 2.26 but had to miss the remainder of the regular season as a result. He made it back for the Wild Card Game and pitched a scoreless inning in the Cubs' loss to the Colorado Rockies in extra innings. In 2019, he was again pressed into closing, this time after Mike Montgomery had been placed on the injured list in mid-April. On April 25th, he made the news when he recorded his third save of the year on the same day his car was stolen. He was dealing with the Chicago police on the phone early in the game, before coming in and nailing the Cubs' win over the Dodgers. His car was found by the cops after being involved in a chase. "It was a crazy day," Strop said. "I'm still dealing with it."