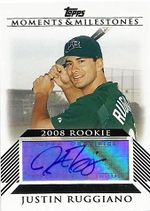 Justin Ruggiano was drafted by the Los Angeles Dodgers in the 24th round of the 2004 amateur draft. He was signed by scout Chris Smith and made his pro debut that summer.

Two months after his major league debut, Ruggiano was a star for Team USA in the 2007 Baseball World Cup. A late addition after Jay Bruce pulled out, Ruggiano hit .333/.432/.633. His three homers tied Yulieski Gourriel, Andy LaRoche, Chia-Hsian Hsieh and Mike Saunders for the tourney lead. He reached base all four times and homered in the US's lone loss, 6-2 to the Italian national team. He homered twice and drove in five in the win over the host Taiwan national team that clinched first place in Pool A for the USA. He was 3 for 4 with a RBI and had the most hits in the Gold Medal game as the US beat the Cuban national team, 6-3. It was the first time the US had ever beaten Cuba in the Gold Medal game of the Baseball World Cup. Ruggiano did not make the tourney All-Star team as teammate Colby Rasmus, Australian CF Trent Oeltjen and Cuban LF Frederich Cepeda were picked as the All-Star outfield.

Justin Ruggiano hit .325 in 39 games for the Oklahoma City 89ers at the beginning of the 2012 season. On May 26th, he was acquired by the Miami Marlins, who sent minor league catcher Jobduan Morales to the Houston Astros to obtain the outfielder. He was immediately added to the major league roster, with Kevin Mattison being sent down to the AAA New Orleans Pelicans to make room. The trade followed injuries to OFs Austin Kearns and Emilio Bonifacio, and the move of Logan Morrison to 1B following Gaby Sanchez’s demotion to New Orleans, leaving Miami short of fly chasers with big league experience. It was the break which Justin needed, as he played 91 games for Miami in 2012, hitting .313 with 13 homers and 36 RBIs. In 2013, he was the Marlins' starting centerfielder, playing 128 games. While his batting average fell to .222, his 18 doubles and as many homers made him the team's second power threat after RF Giancarlo Stanton. He scored 49 runs and drove in 50. After the season, however, the Marlins traded him to the Chicago Cubs on December 12th, in return for back-up OF Brian Bogusevic.

Ruggiano played 81 games for the Cubs in 2014, starting games at all three outfield slots, although right field was his most common position. He hit a solid .281 with 13 doubles and 6 homers, scored 29 runs and drove in 28 and an OPS+ of 113. It was a very solid performance for a fourth outfielder, but the Cubs had a lot of young players coming up through the minor league pipeline, and a veteran back-up like Ruggiano, no matter how productive, was not really a good fit. On December 17th, he was traded to the Seattle Mariners in return for a minor leaguer, Matt Brazis. Justin started the 2015 season in Seattle and stayed until the beginning of June, hitting .214 in only 70 at-bats. he was sent down to the AAA Tacoma Rainiers where he got to play more regularly and hit .296 in 49 games with 9 doubles, 10 homers and 29 RBIs. With no future in Seattle but still swinging a good bat, he was traded to the Los Angeles Dodgers on August 31st for a player to be named later, returning to the organization that had originally drafted him back in 2004.