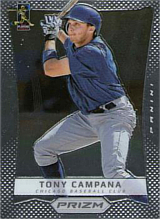 Outfielder Tony Campana was selected by the Chicago Cubs in the 13th round of the 2008 amateur draft. He was signed by scout Lukas McKnight and made his pro debut that summer. He hit .319 and stole 48 bases with the Tennessee Smokies in 2010 and was a Southern League All-Star. Tony made his big league debut with the Cubs in May 2011.

Campana's first major league homer was hit on August 5, 2011 against Mike Leake of the Cincinnati Reds... inside-the-park. It was his first homer as a professional, since he had not gone deep in a regular season game in the minors either (except for another inside-the-parker in the Southern League playoffs in 2010). He hit .259 in 95 games as a rookie in 2011, although he only had 143 at bats, being often used as a defensive substitute in left and right field and as a pinch runner. He had a similar season in 2012, playing 89 games but getting only 174 at bats. He did get to start a bit more often, and his 33 starts and 55 games in center field made him the outfielder who played the most in center for the Cubs. He hit .264/.308/.299, his relatively decent batting average failing to compensate for his poor OBP and total lack of power (his OPS+ was only 68, after a 67 as a rookie). He did steal 30 bases in 33 attempts.

On February 18, 2013, the Cubs traded Campana to the Arizona Diamondbacks in return for two minor leaguers, Jesus Castillo and Erick Leal. He had been designated for assignment by Chicago earlier that month and had not joined the team for the opening of spring training. He saw action in each of the two ensuing seasons, playing 55 games with Arizona in 2013 and 26 in 2014 before an 18-game run with the Los Angeles Angels of Anaheim in the second half of that last season.