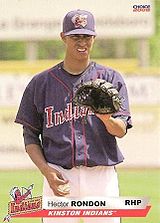 Héctor Rondon was signed as a non-drafted free agent by scout Stewart Ruiz for the Cleveland Indians on August 3, 2004 when he was just 16 years old.

In 2006, Rondon was 3-4 with a 5.13 ERA for the Gulf Coast League Indians. He led his nine in all the wrong categories: hits allowed, runs allowed, earned runs allowed, and home runs given up.

In 2007, Rondon was assigned to the Lake County Captains in the South Atlantic League. For the season, he was 7-10 with a 4.37 ERA. In July, Hector and Neil Wagner combined on a no hitter against the Delmarva Shorebirds. Rondon started the game and struck out five and walked two over six innings. He led the team in games started as well as losses. Rondon was selected to play in the 2007 South Atlantic League All-Star Game. He came in at the start of the sixth and pitched one shutout frame giving up an infield single to Concepcion Rodriguez.

In 2008, Héctor pitched for the Kinston Indians in the Carolina League. Rondon had the lowest ERA of any pitcher in the league during June (1.29). He was named Pitcher of the Week for the week ending on July 7. His July 4 start was his fifth consecutive win and was accomplished in front of the largest crowd in Kinston baseball history (5,513). A week later, he participated in the Futures Game, which was played on July 11 at Yankee Stadium. He was the only representative for the Cleveland farm system. He pitched a 1-2-3 third inning, replacing Polin Trinidad before being relieved by Eduardo Morlan. With over half the season completed, Rondon was leading the K-Tribe in wins, games started, and strikeouts. He finished the year 11-6 with a 3.60 ERA and 145 strikeouts in 145 innings. He led the Indians minors in whiffs. He was 8th in the league in ERA and was fourth in wins. Baseball America rated him the league's #9 prospect, between Brandon Erbe and Chris Marrero.

Rondon split 2009 between the Akron Aeros (7-5, 2.75, 73 K in 72 IP) and Columbus Clippers (4-5, 4.00). His 137 strikeouts led the Indians chain and he won the Bob Feller Award. Baseball America listed him as the Eastern League's 11th-best prospect behind Brad Lincoln and as #9 in the International League (between Matt LaPorta and Reid Brignac.

Héctor began 2010 with Columbus and went 1-3 with a 8.53 ERA before being shut down by injury. He had Tommy John surgery that year. He saw very little action the next two years. In 2011, he allowed one run in three innings for the Mahoning Valley Scrappers. In 2012, he pitched for the AZL Indians (0 R, 6 K in 3 IP) and Akron (1 R in 4 IP). The Chicago Cubs picked him second in the 2012 Rule V Draft, following Josh Fields. He made his debut in the majors on April 3, 2013, replacing Edwin Jackson on the hill with a 2-0 deficit in the bottom of the 6th against the Pittsburgh Pirates. He started on a rough note, walking Andrew McCutchen on four pitches. He fanned both Pedro Alvarez and Gaby Sanchez. After McCutchen stole second, he intentionally walked Neil Walker before getting Russell Martin on an inning-ending fly. Michael Bowden relieved him in the 7th.