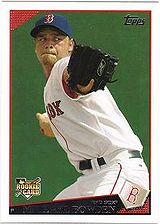 Pitcher Michael Bowden was selected by the Boston Red Sox in the supplemental first round of the 2005 amateur draft with the 47th overall pick. He was signed by scout Danny Haas and made his pro debut that summer with the GCL Red Sox, not allowing an earned run in 6 innings. He began 2006 with the Greenville Drive, where he went 9-6 with a 3.51 ERA in 24 starts before being promoted to the Wilmington Blue Rocks, with whom he made one start late in the season. Following the year, he was ranked by Baseball America the Red Sox second best pitching prospect and third best prospect overall. Bowden began the 2007 season with the Lancaster JetHawks of the California League and went 2-0 with a 1.37 ERA in 8 starts before being promoted to the Portland Sea Dogs in July. With the Sea Dogs, he was 8-6 with a 4.28 ERA in 19 outings as a member of the team's rotation.

Michael started the 2012 season in the Red Sox's bullpen, but made only two appearances before being designated for assignment; he had given up only 1 run in 3 innings, but the Sox's bullpen was reeling, incapable of filling the shoes of departed closer Jonathan Papelbon, and Bowden paid the price. Out of options, he could not be sent down to the minors, and on April 21st, the Red Sox sent him to the Chicago Cubs for outfielder Marlon Byrd. He made his final big league appearance with Chicago in 2013. He went to Japan in 2014 to play for the Seibu Lions. He debuted on Opening Day, relieving Atsushi Okamoto in the 9th inning of a 2-1 loss to the Rakuten Golden Eagles. He retired Makoto Moriyama, Kazuo Matsui and Motohiro Shima in order. He later spent two seasons in the Korea Baseball Organization.