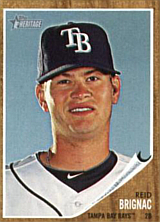 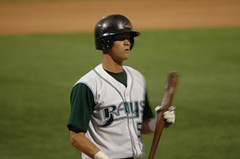 Reid Brignac was a major league infielder over parts of nine seasons.

Brignac was a second-team high school All-American infielder in 2005 according to Baseball America. He batted .417 and slugged .858 with 19 doubles and 58 RBI in his senior year and led his school to the Louisiana 5-A title. The Tampa Bay Devil Rays took him 45th in the 2004 amateur draft, an early second-rounder. He was picked 6th among shortstops and signed with scout Benny Latino for a $795,000 bonus. He debuted with the Princeton Devil Rays and hit .361/.413/.474 in 25 games with a 7 for 14 in 3 games for the Charleston RiverDogs as well. Had he qualified, he would have led the Appalachian League in average. Baseball America rated him the #4 prospect in the league, between Kyle Waldrop and Gio Gonzalez. In 2005, the teenager played for the Southwest Michigan Devil Rays and hit .264/.319/.416 with 15 home runs and 131 strikeouts. Reid was rated the #17 prospect in the league by Baseball America, right behind batting champion Eric Patterson.

Brignac dazzled in 2006. He split Tampa Bay's organization player of the year award with minor league journeyman Kevin Witt and led the system with 281 total bases. He hit .326/.382/.557 with 82 runs scored and 83 RBI in 100 games for the Visalia Oaks and .300/.355/.473 in 28 contests for the Montgomery Biscuits. He almost won the California League batting title, .001 behind Chris Rahl. Brignac's honors included being named to the California League All-Star team at shortstop and winning the league's MVP and Rookie of the Year awards. Baseball America rated him the top prospect in the Cal League, the #2 shortstop prospect in baseball and the #3 prospect in the D-Rays chain. In 2007, Brignac returned to Montgomery, batting .260/.328/.433 in 133 games with 17 home runs. He led the Southern League with 91 runs scored and 228 total bases and was third in the circuit with 81 RBI.

Brignac began 2008 with the Durham Bulls and hit .265/.312/.431 with 24 doubles in 78 games. He was called up to the majors when Jason Bartlett got hurt in early July. Reid hit 9th in his big league debut and started at short. He struck out against Brian Bannister in his first two at-bats but walked his 4th time up and came around to score. He was sent down soon thereafter, and was hitless in 10 at bats in this brief exposure to the major leagues. Despite his minor league pedigree and high draft stock, Reid was never able to grab a firm big league job. The closest he came to a full season of semi-regular activity was in 2010, when he batted .256/.307/.385 in 113 games split on the field between second base (68 games) and shortstop (51 games). Named Opening Day shortstop in 2011, he saw time In 94 games and posted a miserable .193/.227/.221 batting line, with a stint back in Durham unable to get him right. Reid would never play in more than 46 games again. From 2012 to 2016, he played for Tampa Bay, Colorado, the New York Yankees, Philadelphia, Miami and Atlanta, becoming little more than organizational infield depth. He spent the entirety of 2017 in Triple A with the Houston Astros, then was released from a minor league pact with the Washington Nationals on the eve of the 2018 season. In the middle of a season with the Atlantic League's New Britain Bees, Reid retired in July 2018.