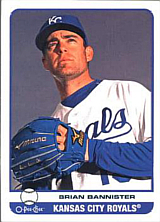 The son of Floyd Bannister, pitcher Brian Bannister made his big league debut with the New York Mets in 2006. Following a five year career, he became a pitching coach and scout with the Boston Red Sox.

Brian played for the University of Southern California in 2000, 2001, and 2003, redshirting in 2002 after surgery for inflammation of a joint in his right elbow. He was picked by the New York Mets in the 7th round of the draft in 2003. Bannister was signed by scout Steve Leavitt and made his pro debut that summer. With Low A Brooklyn in 2003, he went 4-1 with a 2.15 ERA. In 2004, he was with St. Lucie of the Florida State League, where he went 5-7, and also with Binghamton of the Double A Eastern League, where he went 3-3. He improved notably in 2005 with Binghamton, going 9-4 with an ERA of 2.56, and moved up to Triple A Norfolk in the International League, where he went 4-1 with a 3.18 ERA. He was named the New York Mets Minor League Player of the Year. In the 2005 Baseball World Cup, he was shelled, going 1-2 with a 9.69 ERA, getting lit up by both Nicaragua and Cuba after a good effort against Colombia.

In April 2006, Bannister debuted in the bigs and was pitching well before going on the 60-day disabled list with a hamstring problem. After recovering, he pitched 6 games in rehab at Norfolk, and came back to the Mets in late August. During the winter meetings, he was dealt to the Kansas City Royals for Ambiorix Burgos. He was AL Rookie Pitcher of the Month for June 2007 and named to the Topps All-Star Rookie Team at the end of the year, going 12-9, 3.87 in 27 starts (165 innings). On September 8, Bannister allowed two homers to Alex Rodriguez to give A-Rod the all-time single season record for third basemen, as the blasts gave Alex 50 homers, two more than Mike Schmidt hit in 1980. He fell to 9-16, 5.78 with an American League leading 127 runs allowed in 2008 and was through stateside after back to back 7-12 seasons in 2009 and 2010. On June 23, 2010, he was the winning pitcher in a 1-0 Royals victory over the Washington Nationals that was the first career loss of highly hyped Nationals rookie Stephen Strasburg. Julio Franco played with both Brian and Floyd Bannister.

Bannister signed with the Yomiuri Giants in 2011 but left the team before the season began due to concerns over the problems with the Fukushima Daiichi nuclear plant. In late April, he officially withdrew from the club, citing no plans to continue pitching in either the US or Japan. He later became a member of the Boston Red Sox scouting department. In 2017, he was named assistant pitching coach for the major league team while also holding the title of Vice President for pitching development within the organization. He abandoned the pitching coach post after the 2019 season. In 2020, he moved to the San Francisco Giants as co-pitching coach, along with Andrew Bailey.