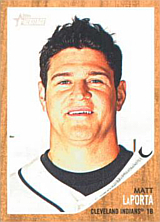 Matt LaPorta was the 7th pick of the 2007 amateur draft. Some considered him a surprise top-10 choice due to a lack of athleticism and injury history, but he was one of the most accomplished hitters in amateur baseball.

The Chicago Cubs first selected LaPorta, then a catcher, in the 14th round of the 2003 amateur draft. He did not sign. In college, he started as a freshman catcher for the University of Florida, the #16 team in the nation, and hit .285/.371/.646. As a sophomore, he batted .328/.428/.698 with 26 homers, 75 runs and 79 RBI in 70 games. He was a consensus All-American as the best first baseman in the country. He led NCAA Division I in home runs and his 185 total bases were 3 behind leader Trevor Crowe and 4 ahead of Alex Gordon, considered the top college player that year by many sources. He tied for 7th in NCAA Division in RBI and came within one of Ryan Shealy's school record. He led the Southeastern Conference in both homers and RBI and was named the All-SEC first baseman and SEC Player of the Year, the first University of Florida player so honored. He hit .250 with 2 homers and 6 RBI in the 2005 College World Series, which Florida dropped in the finals.

He joined the USA college national team and hit .259/?/.552 with a team-leading 4 HR. His teammates would watch his batting practice to see how far he would clobber the ball. In a series against Japan, he broke a bone in his left foot, but continued to play. Later in the summer, he suffered a chipped tooth and needed stitches after being plunked one time, yet held on to his role.

LaPorta was taken 7th overall in the 2007 amateur draft by the Milwaukee Brewers, after being scouted by Charlie Aliano. The choice was considered particularly surprising as the Brewers already had a young Prince Fielder occupying first base, and no use for a designated hitter as a National League team, forcing LaPorta to play in the outfield. He debuted with the Helena Brewers, hitting .259/.286/.519 in 7 games and was promoted to the West Virginia Power. LaPorta hit .318/.392/.750 in 23 games for the Power, with 10 home runs and 27 RBI. In winter ball, he hit .241 for the Mesa Solar Sox but tied for the Arizona Fall League with 6 homers, even with Nolan Reimold and Caleb Stewart. He drove home 22, second in the league to Reimold, and coaxed 17 walks. Baseball America rated him the #4 prospect in the AFL behind Cameron Maybin, Evan Longoria and Travis Snider.

LaPorta began 2008 with the Huntsville Stars and hit .288/.402/.576 with 20 home runs and 66 RBI in 84 games. He was third in the Southern League in slugging, was second to Mat Gamel in RBI and led in homers as of July 7. He was traded with Rob Bryson, Zach Jackson and a player to be named later to the Cleveland Indians for C.C. Sabathia at the deadline. LaPorta was assigned to the Akron Aeros after the deal and hit .233/.299/.350 in 17 games. Baseball America rated him the top power prospect in the Southern League and the #4 overall prospect, behind Clayton Kershaw, David Price and Cameron Maybin and right ahead of Alcides Escobar, Chris Volstad and Gamel.

LaPorta was chosen for Team USA for the 2008 Olympics. Regularly used as a corner outfielder, he only had a .158 average but posted a .313 OBP and .474 slugging percentage. He struck out in 8 of 19 at-bats. He hit a 3-run homer off Shairon Martis and a solo shot against Tsuyoshi Wada in Beijing, but was more noted for his role in a game against the Chinese national team. In that contest, LaPorta was involved in a home plate collision which injured Chinese backstop Wei Wang. China manager Jim Lefebvre complained about the incident and was ejected. When LaPorta came up next, Kun Chen hit him in the helmet with a fastball; Chen was ejected and LaPorta left the game but was not injured.

LaPorta began 2009 with the Columbus Clippers and hit .333/.414/.640 with 5 homers, 22 runs and 14 RBI in his first 21 games. He was among the top 5 in the International League in runs scored when he got called up to Cleveland when Travis Hafner was placed on the disabled list. In his big league debut on May 3, he hit 8th and played right field, but struck out in his first at-bat, against Justin Verlander, and finished 0 for 4 with two strikeouts. He hit his first home run in Toronto the next day.

Matt's big league career never really took off. He was jerked around between first base and outfield duties in 2010 to accommodate the signing of slugger Russell Branyan and never got on base particularly well, peaking with a .308 clip in 198 plate appearances in 2009. Once considered the crown jewel of the Sabathia deal, he was eclipsed by the player to be named in the deal, second generation star and natural outfielder Michael Brantley. LaPorta's last big league action came in 2012, and he retired in April 2015.