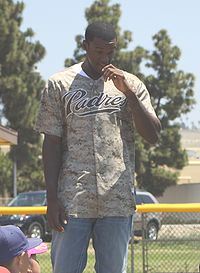 Outfielder Cameron Maybin, born in 1987, was the youngest player in the American League in 2007.

Maybin was selected by the Detroit Tigers in the first round of the 2005 amateur draft. He was signed by scout Bill Buck and made his pro debut the next year with the West Michigan Whitecaps, hitting .304 with 9 homers, 69 RBIs, and 27 stolen bases for the club. Maybin was picked for the 2007 Futures Game but an injured shoulder kept him out of the contest; Jacoby Ellsbury took his spot. He was called up to Detroit a few weeks later and made his debut on August 17th.

Maybin's first career major league home run came against Roger Clemens. This was the first home run ever where the batter had been born after the pitcher's first Cy Young Award.

In December, Maybin was traded with Andrew Miller, Mike Rabelo, Eulogio De La Cruz, Dallas Trahern and Burke Badenhop to the Florida Marlins in a blockbuster deal for Miguel Cabrera and Dontrelle Willis. While he was expected to become a regular with the Marlins, it didn't pan out. He played most of 2008 in the minors. He hit .277 in 108 games for the Jacksonville Suns of the Southern League, but was an outstanding 16 for 32 in 8 games in Florida. In 2009, he played 54 major league games, but hit only .250 with 13 RBI. At AAA New Orleans, he hit a solid .319 in 82 games. He suffered a setback in 2010, missing time with an injury after beginning the season as the Fisgh's starter in centerfield. He hit poorly and then went back to New Orleans for 33 games, where he hit .338. However, he also missed almost all of July with a sprained left shoulder, then came back to the National League in late August. He spent 82 games in the majors overall, but hit only .234. By then the Marlins were chock full of good young outfielders, with Logan Morrison, Chris Coghlan and Mike Stanton all competing for playing time. After the season, the Marlins traded Maybin to the San Diego Padres for Ps Edward Mujica and Ryan Webb.

In 2011, Maybin was named the Padres' team MVP. He hit .264 with 9 homers, 40 RBI and 40 stolen bases while playing an excellent defensive centerfield in his first full season as a regular, when he played 137 games and had 568 plate appearances. Before the 2012 season, the Padres signed him to a 5-year $25 million contract. However, he regressed significantly in the deal's first season, falling to .243/.306/.349 in 147 games. he scored 67 runs after having scored 82 the year before, and fell from 40 to 26 stolen bases. He then lost almost all of the 2013 season to injuries, being limited to 13 games in which he went 8 for 51 (.157). The injuries included a wrist problem, which required surgery after the season, and a torn ligament in his left knee. He was hoping to come back in 2014 but suffered another setback on March 2nd when he injured his shoulder in making a diving catch in a spring training game. He had to undergo an MRI and the initial reading was that he would be out for two to three months with a biceps tendon injury. The healing went faster than expected, however, as he was back in the line-up on April 27th, marking the occasion by collecting a pair of hits in a 4-2 win over the Washington Nationals. He was hitting .247 with 1 homer and 9 RBI in 62 games when he was handed a 25-game suspension on July 23rd for violating Major League Baseball's PED program. It was the second positive test for amphetamines in his case, and he explained that he used drugs which contained the banned substance to treat attention deficit disorder, but had failed to obtain the proper therapeutic use exemption. He was the first major leaguer to be suspended for violating the PED policy that year.

On the eve of the 2015 season, on April 5th, the Padres traded Maybin along with OF Carlos Quentin, prospects Matt Wisler and Jordan Paroubeck, and the 41st overall pick in the 2015 amateur draft to the Atlanta Braves for Craig Kimbrel and Melvin Upton. Both Maybin and Quentin had lost their starting jobs in the Padres' outfield as a result of the Padres acquiring a number of outfielders in the off-season, and were joining a Braves team undergoing a complete overhaul. He played 141 games for the Braves, hitting .267 with 10 homers and 59 RBIs and 65 runs scored. After the season, on November 20th, he was traded again, this time back to his original team, the Detroit Tigers, in return for Ps Ian Krol and Gabe Speier. However his second stint with the Bengals began badly, as in the first game of spring training in 2016, he was hit by a pitch and suffered a non-displaced fracture in his left wrist, putting him out until after Opening Day. He returned to play 94 games as the Tigers' main center fielder, hitting .315 with 4 homers and 43 RBIs.

On November 3, 2016, one day after the completion of the World Series, he was traded to the Los Angeles Angels of Anaheim in return for P Victor Alcantara in what was the first major league trade of the off-season. He was slated to play left field in L.A., with superstar Mike Trout entrenched in center. He played 93 games for Los Angeles, hitting .235 with 6 homers and 32 RBIs, in addition to 29 stolen bases.He did get to play a lot of centerfield in the end, as Trout had to miss six weeks in mid-season with an injury. On August 31st Maybin was claimed off waivers by the Houston Astros, a move that was made to make room for the Angels to acquire OF Justin Upton from the Detroit Tigers in a trade the same day. On September 3rd, he hit a three-run homer against the New York Mets to help the Astros complete a three-game sweep with an 8-6 win in their return to Minute Maid Park after having been displaced by Hurricane Harvey. On September 5th, another homer broke up a no-hit bid against Emilio Pagan of the Seattle Mariners with one out in the 7th; the homer came after a walk to Brian McCann and was instrumental to a 3-1 win by the Astros. He continued his torrid streak the next night with another key homer, this one a two-run shot off Edwin Diaz in the 9th to give Houston a 5-3 win over the Mariners. His acquisition became even more crucial when CF Jake Marisnick, who was having a gereat season albeit under the radar, went down with a broken thumb on September 13th, an injury that was likely to preclude him from playing again unless the Astros reached the World Series. He played 21 games with Houston, hitting .186 with 4 homers and 13 RBIs. He only played in 6 games in the postseason, but his few appearances were important, as he was usually called upon as a pinch-runner or pinch-hitter in key situations late in close games. He hat a couple of hits, scored an couple of runs and stole one base, his most important contribution coming in Game 2 of the World Series on October 25th. He led off the top of the 11th inning with a single off the Los Angeles Dodgers' Brandon McCarthy, then stole second base before a rattled McCarthy served up a gopher ball to George Springer. Both Maybin and Springer's runs were crucial, as Houston won the game, 7-6.

It took a while for Maybin to find a team for 2018. Spring training was already under way when he signed a one-year deal with the Miami Marlins. There was plenty of opportunity for him to receive playing time if he performed, as the Marlins had traded all three of their starting outfielders during the off-season and were looking for "swift and athletic outfielders" to replace them, a description that fit Maybin to a tee. He hit .251 in 99 games while playing all three outfield positions, then at the trading deadline was sent to the Seattle Mariners in return for a minor leaguer and international bonus pool money. His playing time went down significantly in Seattle, as he had just 91 at-bats in 30 games, hitting .242 as the Mariners faded from the playoff race. Following the season, he signed a free agent contract with the San Francisco Giants on February 18, 2019, but on March 1st, he was arrested in the early hours of the morning in Scottsdale, AZ on the suspicion of driving under the influence. He was released on March 23rd, then signed with the Cleveland Indians who assigned him to AAA with the Columbus Clippers. He hit .216 in 14 games, then on April 25th, he was purchased by the New York Yankees, who were critically short of position players after placing Clint Frazier on the injured list - the 15th Yankees player to join the list already that season. Like others who got a chance to play for the Bronx Bombers that year, he had a great season, hitting .285 in 82 games with 11 homers and 32 RBIs.

He finished his career by playing two more seasons with three different teams. He started the pandemic-delayed 2020 back with his original team, the Detroit Tigers and hit .244 in 14 games. At the trading deadline on August 31st, he was sent to the Chicago Cubs in return for SS Zack Short, where he played another 15 games, hitting .250 for a combined line of .247, 1 homer and 7 RBIs in 32 games. He went 0 for 2 as the Cubs were swept by the Miami Marlins in the Wild Card Series. He was still with the Cubs in spring training in 2021, but did not appear at the major league level, playing 10 games in AAA with the Iowa Cubs, where he hit just .103. On May 18th, the New York Mets, who were devastated by injuries and were looking for some experienced major league outfielders, purchased his contract. However, he was done as a major league player, going 1 for 28 (.036). He appeared in 12 more games in AAA, with the Syracuse Mets and hit .186. His final major league game came on May 29th and he last played for Syracuse at the end of July. He announced his retirement the following January, after 15 major league seasons of hitting .254 with 187 stolen bases.