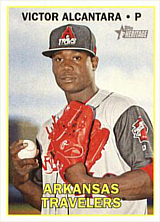 Pitcher Victor Alcántara was first signed by the Los Angeles Angels of Anaheim as an amateur free agent before the 2012 season; the scout was Roman Ocumarez. He made his professional debut that season with the DSL Angels of the Dominican Summer League and moved to the United States in 2013 with the Orem Owlz of the Pioneer League. He was on the World team in the 2014 Futures Game and entered 2015 as the Angels' #6 prospect per Baseball America. Working as a starter, he went 7-12, 5.62 in a tough season with the Inland Empire 66ers of the California League, then in 2016 went 3-7, 4.30 of the Arkansas Travelers of the Double A Texas League.

In spite of unimpressive numbers, scouts still liked his potential and on November 3, 2016, he was involved in the first major league trade of the offseason, being sent to the Detroit Tigers for Cameron Maybin. He made his big league debut in September 2017 and was an Opening Day victor for the Tigers in their 2019 opener. A minor league free agent at season's end, it was announced in February 2020 that he was suspended 80 games following a positive test for the performance-enhancing substance Stanozolol.