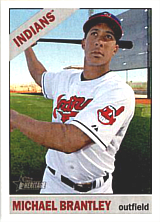 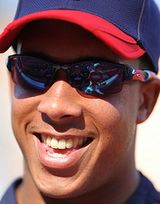 The son of Mickey Brantley and cousin of Justin Brantley, Michael Brantley is an outfielder who was the prize acquisition by the Cleveland Indians from the Milwaukee Brewers, as the player to be named later, in the CC Sabathia deal back in 2008. Michael is a four-time American League All-Star.

Brantley was signed by Brewers scout Larry Pardo as a 7th round pick in the 2005 amateur draft. He made his major league debut with the Indians in 2009 and started with a bang, picking up 7 hits in his first 19 at bats for a .368 average after 5 games, finishing with a .313/.358/.348 line in September action. In 2012, Brantley had a 22-game hitting streak for the Indians. He had a career year in 2014, hitting .327 with 45 doubles and 20 homers in 156 games, scoring 94 runs and driving in 97. He was an All-Star for the first time and also won a Silver Slugger Award that season. Brantley missed most of the 2016 season to injury; limited to 11 games, he missed the Indians' run to the 2016 World Series. He made a remarkable comeback in 2017, as he was named to the All-Star team for the second time and was one of the offensive leaders as the Indians led the AL Central. On August 8th, he was placed on the disabled list with an injury to his right ankle. The Indians were concerned enough that they traded for outfielder Jay Bruce the next day. Indeed, by late September, Brantley still had not returned and the Indians were conceding there was little chance he would play again this season, even if they went deep in the postseason. In 88 games, he hit .299 with 9 homers and 52 RBI. With two games left to play, he was reactivated so the team could test whether he would be able to contribute in the postseason. He was not 100% and the Indians would probably have preferred not to use him, but an injury to Edwin Encarnacion in Game 2 of the ALDS forced them to turn to Brantley. He went just 1 for 11 as the Indians were shockingly eliminated in five games. After the season, he underwent surgery on his right ankle.

He started the 2018 season on the disabled list but was activated before the Indians' home opener on April 6th. He got his season off on the right foot with a two-run single off Danny Duffy of the Kansas City Royals in the 1st inning, leading the Indians to a 3-2 win. It was the start of a solid season, as he returned to the All-Star Game and hit .309 with 36 doubles, 17 homers, 89 runs scored and 76 RBI. In the postseason, he went 2 for 10 as the Indians lost to the Houston Astros in the Division Series. Following the season he became a free agent and, on December 17th, news media reported that he had signed a two-year deal with the Houston Astros. He excelled in his fancy new digs, batting .311 with 64 extra base hits (22 homers), 88 runs scored and 90 runs driven in with a third straight All-Star appearance. He batted .321 in the World Series as the Astros fell in 7 games to the Washington Nationals. In the pandemic-shortened 2020 season, he hit .300 in 46 games, with 5 homers and 22 RBIs. HIs OPS+ was 126, exactly the same as in his first season in Houston. He continued to do well in the postseason, with a total of 18 hits over three series, for an average of .346, along with 10 runs, 11 RBIs, 6 walks and 3 homers.

Brantley was a free agent again after the 2020 season, and signing him again was a priority for the Astros, especially as outfield-mate George Springer, also a free agent, was unlikely to return. On January 20, 2021, one day after Springer had signed with the Toronto Blue Jays, a rumor briefly made the rounds that Michael as well was about to sign with the Jays, but that was denied after a few hours, it was announced that he had inked another two-year deal with Houston, for $32 million.