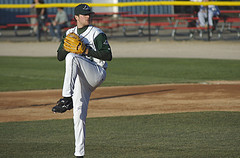 Wade Davis was drafted by the Tampa Bay Devil Rays in the 3rd round of the 2004 amateur draft. He was signed by scout Kevin Elfering and made his pro debut that summer.