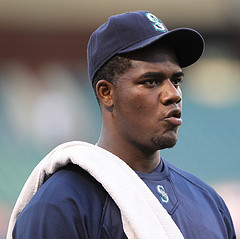 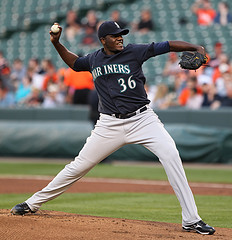 Michael Pineda reached AAA in 2010 at age 21 and made his major league debut at the start of the following season.

Pineda was signed by scouts Patrick Guerrero and Frank Taveras Jr. for the Seattle Mariners at age 16. He had an excellent pro debut with the 2006 DSL Mariners, going 2-1 with a 0.44 ERA, allowing only one earned run all season. In 2007, he had a 6-1, 2.29 record in regular action for the same team. Pineda came stateside with the 2008 Wisconsin Timber Rattlers and had a 8-6, 1.95 record. Opponents hit just .216 against him. He led the Seattle farm system in ERA, opponent average and strikeouts (128). He was 4th in the affiliated minors in ERA behind Madison Bumgarner, Jon Kibler and Chris Cody. Pineda was second in the Midwest League in ERA behind Kibler. He was left off the MWL All-Star team in favor of Alfredo Figaro. Baseball America did not list him as one of the circuit's top 20 prospects. He was named Mariners Minor League Pitcher of the Year.

Pineda battled injury in 2009, missing most of the year due to elbow strain. He was 4-2 with a 2.84 ERA for the High Desert Mavericks while healthy and threw three shutout innings for the AZL Mariners. He struck out 52 in 47 1/3 innings for the year.

He made the M's starting rotation out of spring training 2011 as the number five starter. On April 5th, he struck out the first big league hitter he ever faced, Ian Kinsler of the Texas Rangers, on three pitches, but gave up 3 runs in 6 innings to lose the game. Still, he impressed by keeping the red-hot Texas bats relatively quiet and not allowing a home run. He ended his first month in the majors with a 4-1 record and a sparkling 2.01 ERA to be named the American League's Rookie of the Month. He pitched at least 6 innings in his first five starts, giving up only 22 hits and 12 hts over 31.1 innings, while striking out 30 opposing batters. He was named to the mid-summer All-Star team, getting a nod as a replacement for one of the starting pitchers unavailable because of the "Sunday Starter rule". He was 8-6 at that point, but with a 3.03 ERA and 113 strikeouts in 113 innings, against only 36 walks. He pitched a perfect inning in the All-Star Game, striking out two batters. He finished the season with a record of 9-10, 3.74 in 28 games with 173 strikeouts in 171 innings. His won-loss record was hurt by the M's poor performance over the second half, but the New York Yankees saw him as a future superstar. On January 13, 2012 they sent two of their best prospects - C/DH Jesus Montero and P Hector Noesi - to the Mariners to acquire Pineda and pitcher Vicente Campos. The trade was only finalized on January 23rd, as all four players needed to pass physical exams.

At the end of his first spring training with the Yankees in 2012, Pineda complained of tightness in the back of his right shoulder and had to start the season on the disabled list after undergoing an MRI and being diagnosed with tendinitis. He had been battered around in his last practice start, giving up 6 runs in 2 2/3 innings to set off alarms, although there had been concern all spring that his velocity was noticeably down. The Yankees got more bad news on April 25th when a further medical exam found a tear in the labrum muscle of Michael's throwing shoulder. The injury required season-ending surgery. While working out in Tampa, FL, he was arrested by local police in the early hours of August 20th after being spotted driving his SUV erratically and at high speed, and was charged charged with DUI, having tested for a blood alcohol level well over the legal limit.

When Pineda showed up for spring training with the Yankees in 2013, he was still not ready to pitch, but at least the team was confident that he could be in the starting rotation by May or June, but that turned out to be way too optimistic. He began his minor league rehabilitation on June 9th with the Class A Tampa Yankees, before moving to the AA Trenton Thunder at the end of the month and the AAA Scranton/Wilkes-Barre Yankees on July 6th. He was 2-1 with a 3.22 ERA in 10 starts between the three levels when he was taken out of a game on August 2nd due to stiffness in his shoulder. He was shut down completely for two weeks, then resumed throwing from flat ground in mid-August. In spite of the setback, the Yankees were still hoping to finally have him in pinstripes before the end of the season.

When Pineda showed up in spring training in 2014, he was finally healthy and was able to earn the team's fifth starter job, beating out Adam Warren and Vidal Nuno. He finally made his belated debut in pinstripes on April 5th against the Toronto Blue Jays. He pitched well over 6 innings but was charged with a 4-0 loss. He earned his first win on April 10th, 4-1 over the Boston Red Sox; there was some controversy surrounding his performance, as the Red Sox's broadcasters claimed to have detected pine tar on his pitching hand. Pineda dismissed this, stating it was simply sweat mixed with dust, and the matter was never brought to the attention of home plate umpire Brian O'Nora, who would have been the only person who could have properly investigated it. On April 16th, he followed Masahiro Tanaka's strong performance in the opening game of a doubleheader by holding the Chicago Cubs scoreless over 6 innings as the Yankees swept the twinbill, 3-0 and 2-0. It was the first time a team had recorded two shutouts on the same day since 1988. On April 23rd, however, his pine tar antics caught up with him in another start against the Red Sox. This time, Boston manager John Farrell brought a stain on the right side of Michael's neck to the attention of home plate umpire Gerry Davis in the 2nd inning, and Davis promptly ejected Pineda from the game for using a foreign substance on the baseball. Pineda had given up a pair of runs in the 1st inning and was charged with the 5-1 loss; after the game, he explained that he had had trouble gripping the ball because of the cold in the 1st inning and had applied the substance to counter that. He was handed a ten-game suspension the next day, which he declined to appeal, given the circumstances. While he was serving the suspension, he felt tightness in his back during a simulated game; the diagnosis was a muscle tear that would lead to a stay on the disabled list as soon as the suspension was over. he was out of action until mid-August, then took his regular turn in the starting rotation for the rest of the season, ending up with a record of 5-5, 1.89 in 13 starts.

On May 10, 2015, he had a great game against the Baltimore Orioles as he struck out at least two batters in each of the 7 innings he pitched, ending up with 16, before having to leave because of a high pitch count. He was credited with a 6-2 win, while the 16 Ks tied for second-most in Yankees history, behind an 18-strikeout game by Ron Guidry, and on equal footing with efforts by David Wells and David Cone; it was also the most times the Orioles had struck out against any pitcher in one game. Even better, he did not walk anyone in improving to 5-0 on the year. On June 17th, he pitched 6 no-hit innings against the Miami Marlins before giving up a lead-off homer to Christian Yelich in the 7th. He left after two more outs, having reached his pitch count limit, and manager Joe Girardi makes it clear after the game that he would not have gone any deeper even if he had not given up a hit, given his history of arm woes. He was given credit for the 2-1 win, improving to 8-3 on the year. He wasn't quite able to maintain that level of performance for the rest of the year, as he ended up with a record of 12-10, 4.37 in 27 starts.

In 2016, Pineda was only 6-12 for the Yankees with an ERA of 4.82, but he still managed to post the best K/9 ratio in team history, with 207 strikeouts in 175 2/3 innings, or 10.6 strikeouts per nine innings. Both his innings pitched and strikeouts were personal bests, and his ratio was also the best in the American League. He was the starter for the Yankees in their home opener against the Tampa Bay Rays on April 10, 2017 and had a great performance, as he retired the first 20 batters he faced before giving up a double to Evan Longoria. He lasted until two outs in the 8th before turning the ball over to Tyler Clippard and received credit for his team's 8-1 win. He had 11 strikeouts on the day. He went a solid 8-4, 4.39 in 17 first-half starts, but just as the second half was set to begin on July 14th, the Yankees received some bad news, learning that Michael had a partially torn ligament in his elbow. It forced him to miss the second half of the year as he underwent Tommy John surgery. He became a free agent after the season and on December 13th, he signed a two-year deal with the Minnesota Twins for $10 million, even though he was not expected to be back before the second half of the 2018 season.

In fact, Pineda did not pitch at all in the majors in 2018, but in 2019 he was back for a much improved Twins team that led the AL Central from the start of the season. In 26 starts, he went 11-5 with a 4.01 ERA, with 140 strikeouts in 146 innings. However that excellent comeback season was cut short on September 7th when he was handed a 60-game suspension after testing positive for Hydrochlorothiazide, a diuretic that is outlawed under Major League Baseball's Drug and Prevention Program. Of course, he claimed that he took the substance unwittingly in an over-the-counter medication provided by a friend, like most other players caught red-handed do.