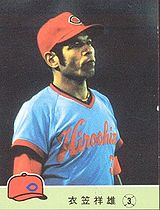 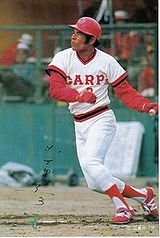 A longtime member of the Hiroshima Carp, Sachio Kinugasa played 2,215 consecutive games between 1970 and 1987; unlike Cal Ripken Jr., he retired with his streak intact. Kinugasa also hit 504 career home runs in his long career that started in 1965. The third baseman was a 13-time All-Star and was elected to the Japanese Baseball Hall of Fame. While often among the league leaders, he rarely led in major categories, leading once in RBI, once in steals and once in hits and never in home runs. He might not have gotten much Black Ink, but he had a lot of Gray Ink.

Kinugasa's father was an African-American soldier who abandoned Kinugasa's family when he was young. Sachio would not discuss the topic and it was a policy of the Carp not to raise the issue, which was not mentioned in either of his authorized biographies. [1] Roommate Tatsuo Okitsu said that Kinugasa studied English at night, hoping his father would return and meet him. Even when Sachio broke Lou Gehrig's Most Consecutive Games Played record, though, his father did not contact him. [2]

Kinugasa employed a batting style which employed long, aggressive swings. This was highly unusual in Nippon Pro Baseball as it was deemed an "American" type of swing and not authentically Japanese. Sachio's batting coach did not tamper with it, saying "Kinugasa wasn't really Japanese, so it couldn't be helped." [3] Robert Whiting writes that "Kinugasa swung so hard that for many years he suffered from whiplash." [4]

The subject of childhood insults due to his racial heritage, Kinugasa was an outsider as a youth. He took up judo but his middle school did not offer it, so he opted for baseball over rugby, a smart choice in retrospect. [5] A star catcher in high school, he signed with Hiroshima for a 10-million-yen bonus and bought a Ford Galaxy with the money, starting his reputation as a guy who loved fancy cars. [6] After an accident, though, the team made him give up his driver's license. [7]

Kinugasa became a regular at age 21 and produced at a .276/.377/.494 clip with 21 homers. He was among the 1968 Central League leaders in home runs (tied for 8th with Tatsuhiko Kimata and Kazuhiro Yamauchi), steals (11, tied for 9th with Morimichi Takagi), walks (54, 5th, between Kazuyoshi Yamamoto and Yamauchi), slugging (9th, between Makoto Matsubara and Willie Kirkland), OBP (5th, between Yamauchi and Shinichi Eto), OPS (6th, between Yamauchi and Kimata) and times hit by pitch (11, 2nd, one behind Shigeru Takada. In 1969, he hit .250/.329/.383 with 15 long balls. He was caught stealing 15 times, the most in the Central League, while stealing 32. He was second in steals, 3 behind Isao Shibata, tied Hiroaki Inoue for second in hit-by-pitch (11, behind Takada) and grounded into the most double plays (17, 2 more than Shigeo Nagashima).

In 1970, he batted .251/.333/.431 with 19 homers and tying Kirland for the league lead with 81 strikeouts. He tied for 8th in steals (13), was 6th in walks (42), tied for 4th in times plunked (8), tied Matsubara for third in double play grounders (14), tied Dave Roberts for 8th in home runs, was 6th in RBI (57, between Kimata and Koji Yamamoto), was 7th in OBP (between Goro Toi and Shiro Takegami), was 6th in slugging (between John Miller and Kazuyoshi Yamamoto) and was 7th in OPS (between Motoo Ando and Toi). Known for his drinking, Kinugasa came back to the Carp dormitory after a game that year drunk. Coach Junzo Sekine was still there, waiting for his nightly batting practice with Sachio. Kinugasa took 100 swings and then collapsed to the ground in tears. For years afterwards, he made such practices part of his routine and would often vanish from a bar to go swing the bat. [9]

Kinugasa's streak began at the very end of 1970 on October 19th. He had only missed a few games in each of the three years he had been a regular, but would never miss another contest in the next 17 years.

Kinugasa batted .285/.388/.509 in 1971, becoming a star. He made his first All-Star team, swatted 27 homers, drove in 82, led the league with 15 times hit by pitch (3 ahead of runner-up Toshiyuki Mimura), had a streak of home runs in five straight contests and went yard three times in another game. He finished 4th in runs (72, between Takada and Taira Fujita), 3rd in hits (131, behind Nagashima and Jitsuo Mizutani), tied Kimata for 6th in home runs, was third in RBI (after the great Sadaharu Oh and Nagashima), third in caught stealing (11, behind Shibata and Masayuki Nakatsuka), was second with 64 walks (a distant 57 behind Oh), tied for 6th in strikeouts (71, even with Fujita and Akira Hishikawa), was second in average (35 points behind Nagashima), ranked third in OBP (behind Oh and Nagashima), was 5th in slugging (between Kimata and Fujita) and was third in OPS (after Oh and Nagashima). He had no chance of the Best Nine nod at first base, which Oh had locked up as usual.

While playing every day, Kinugasa hit 20 homers a year every season for the next 12 to extend his total run to 13. He moved to third base at the recommendation of Joe Lutz [10] and hit .276/.340/.457 in 1975, made his third All-Star team and the first of three Best Nines (now that Nagashima was gone and he no longer shared a position with Oh, he had a chance). He only finished 9th in home runs (21, one behind Martin and one ahead of Clete Boyer and Kinji Shimatani), tied for 8th in RBI (71, even with Yazawa), tied Roger Repoz for third in doubles (22) and was second in grounding into twin killings (21, 2 behind Bob Taylor, not as good as some of his prior leaderboard showings. He hit only .130/.231/.261 in his first Japan Series as Hiroshima dropped the 1975 Series to the Hankyu Braves. It was the first time Hiroshima had ever won the CL pennant.

In the 1978 season, the third baseman batted .267/.372/.505 with 30 circuit clouts and 87 RBI. He went 9 for 10 in steals - that is, if you leave out a stretch where he was gunned down in 12 straight tries. He became the 14th player to 250 home runs when he took Masao Tamura deep. He was plunked by 11 pitches, tied with Yoshihiko Takahashi and Kono most in the CL. He was 8th in runs (81, between Keiji Nagasaki and Yoshikazu Takagi), tied Osugi for 9th in home runs, was second in times caught stealing (behind Takahashi), 6th in walks (69, between Nagasaki and Masayuki Kakefu), 4th in strikeouts (83, between Kakefu and Charlie Manuel), 5th in double play grounders (14, tied with Manuel and Matsubara).

In 1979, the 32-year-old veteran produced at a .278/.376/.485 clip with 20 homers and 15 steals in 19 tries. His streak was almost snapped in August when he was hit in the back by a pitch from Takashi Nishimoto and the doctors told him not to play; he had appeared in 1,123 contests in a row at that point. He appeared the next day, saying "If I had played and swung the bat, the pain in my shoulder would last only an instant. If I had to stay home and watch the game on TV, I'd hurt all over for three hours." [11] He was 5th in the CL in runs (82, between Takahashi and Wakamatsu), tied Koji Yamamoto for 8th in steals, tied Wayne Garrett and Mitsuo Motoi for 7th in walks (55), tied Yukio Yaegashi for 4th in times plunked (9) and was 9th in OBP (between Sugiura and Oshima). It was the last time he failed to make the All-Star team. Playing only part-time in the 1979 Japan Series, he went 2 for 14 and hit into two double plays as Hiroshima won their first title. Missing one game of the Series did not affect his consecutive-game streak.

1980 marked his 6th All-Star appearance, his second Best Nine and his first Diamond Glove Award. He improved to .294/.361/.526 with 31 homers, 16 steals (in 22 tries) and 85 RBI. He was hit by 10 pitches, most in the circuit. He also tied Akinobu Mayumi for second in runs (79, 12 behind Koji Yamamoto), was 5th in hits (144, between Yamamoto and Jim Lyttle), ranked third in home runs (behind Yamamoto and Tomio Tashiro), was third in RBI (after Yamamoto and Yashiro), tied for 9th in steals (with Yasushi Tao and Wakamatsu), was second in strikeouts (89, 15 behind Tashiro), was 6th in slugging (between Sugiura and Mayumi), was 6th in OPS (between Sugiura and Roy White) and was 4th in total bases (behind Yamamoto, Tashiro and Yazawa). He hit several milestones: the 60th player to 1,500 hits (off Osamu Nomura), 13th to 300 home runs (taking Kimiya Fujisawa deep) and the 6th to 1,000 strikeouts (against Takenori Emoto). He hit .174/.267/.348 in the 1980 Japan Series as Hiroshima won again. He homered in game 7 to help send the Kintetsu Buffaloes packing.

The '84 season saw him produce at a .329/.373/.573 rate for his best year. The veteran homered 31 times, drove in 102 and stole 11 in 12 attempts. He led the CL in RBI for the only time in his career (3 over Yazawa), tied for the most sacrifice flies (7, even with Okada and Noriyoshi Sano), was third in average (behind Sadaaki Yoshimura and Kazunori Shinozuka), tied for 4th in runs (79, even with Kakefu and Ryuzo Yamasaki), was third in hits (161, behind Tao and Yazawa), tied Leon Lee and Macha for 7th in doubles (25), tied Macha and Nakahata for 6th in homers, tied Kakefu for 4th in strikeouts (83), was 4th in slugging (behind Bass, Macha and Yazawa), was 5th in OPS (between Kakefu and Koji Yamamoto, despite not making the top 10 in OBP), ranking second with 281 total bases (9 behind Kakefu), won his second Diamond Glove, made his third and last Best Nine and his 9th All-Star team. He was honored with his only MVP award. In the 1984 Japan Series, he hit .200/.355/.600, scored six runs and homered three times as his poor contact in the post-season again was compensated for by power and walks. He homered in games 1, 3 and 7, all Hiroshima wins as the team topped the Hankyu Braves. Kiyoyuki Nagashima, who also hit three homers in the Series, was named MVP. Through 2013, Hiroshima has yet to win another Series.

In 1987, Kinugasa hit .249/.297/.432 with 17 homers. On June 13, he broke Gehrig's consecutive game streak; 55,000 fans showed up and there was a huge ceremony with lots of Japanese media coverage. Even while he was approaching the record, and at age 40, he maintained one of the hardest workout routines on the club. Rick Lancellotti said "He played hard and did all the drills that the younger kids did. The last week, we were all just hoping that he wouldn't get hurt... He would dive for a ball, and everybody would run over, 'Are you okay? Are you okay?'" [12] He got his 2,5000 hit (the 4th NPB player to do so) off Koichi Emoto) and his 500th homer (the 5th player to do so, August 11th, off Takao Obana). In his final game, on October 22nd, he went out in style with a homer. 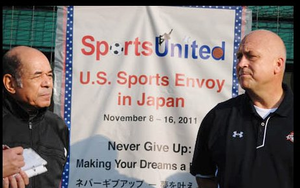 "Iron Men" of baseball. Kinugasa and Ripken Jr. in August 2013

Kinugasa was hired by TBS as a baseball announcer in 1994 and two years later was inducted into the Japanese Baseball Hall of Fame. The same year, on June 14th, Ripken broke his world record for consecutive games. [13]