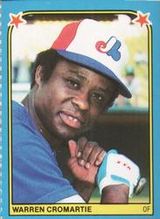 "There was this set of twins, they were big fans... They'd brought a big Canadian flag. I took the flag, I'm swinging the flag, sticking it right up Philly's ass. They had Carlton on the mound. 'How you gonna beat Lefty? How?!' We weren't even supposed to show up. I was proud. I was (BLANK)ing proud. When I went up there and started waving the flag, people went ape(BLANK)." - Warren Cromartie, reflections on the Montreal Expos 1981 NLDS win over the Philadelphia Phillies, to Jonah Keri, Up, Up & Away 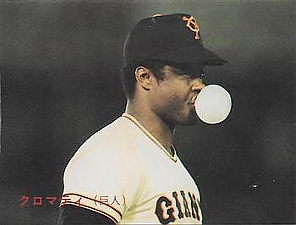 Warren Cromartie may have been the heart and soul of the Montreal Expos. He was a regular from 1977 to 1983, coming up originally in concert with Hall of Famer Andre Dawson and cannon-armed Ellis Valentine to form a most formidable outfield. Warren enjoyed a second life as a star with the Yomiuri Giants after leaving MLB and remains a most determined force in bringing major league ball back to Montreal.

Drafted five times, Cromartie reached the Expos a year and change after his selection in the secondary phase of the 1973 amateur draft. He debuted in Double A with the Quebec Carnavals of the Eastern League, hitting .336 with 13 home runs in 129 games, before coming up in September 1974 to hit 3-for-17. He moved to the Triple A Memphis Blues in 1975, then was part of a tremendous Denver Bears team in 1976, hitting .337 in 107 games. He had a couple of stints with the Expos that season, hitting .210 in 33 games.

Warren broke through with a solid season in 1977, playing left field alongside Rookie of the Year Andre Dawson, and hitting .282/.321/.395 with 175 hits, including 41 doubles, in 155 games. The Expos' outfield for the next three seasons, composed of Cromartie, Dawson and Ellis Valentine in right field, was considered one of the better ones in all of baseball. To match up with Dawson's and Valentine's defensive gifts, Cro worked hard prior to the 1978 season, a season in which all three men led their positions in assists. Cro's bat also was up to the rigors of another full-time season, hitting .297/.337/.418 in 159 games with 10 homers, 32 doubles and 77 runs scored. On July 19th, he walked off the first game of a doubleheader at Stade Olympique with his first grand slam, sinking Gene Garber and the Atlanta Braves, 8-6. The Expos won 95 games with their vaunted offense and strong pitching corps in 1979, finishing runner-up to the Pittsburgh Pirates in the quest for a first postseason berth. Warren did his part, belting 46 doubles and scoring 84 runs.

After the 1979 season, first baseman Tony Perez left as a free agent, while the Expos acquired outfielder Ron LeFlore. As a result, they moved Cro to first base, where he was the regular in both 1980 and 1981. While he did not have the typical power of a first baseman - his career high for homers was 14 in the majors - he was a solid left-handed contact hitter. Warren established a career high in home runs in 1980, clubbing 14, while batting .288/.345/.430 with 74 runs scored and 70 RBI in playing every game. In the strike-shortened 1981, Warren batted .304/.370/.419, a season split between first base and right field. He went 2-for-4 in the opener of a five-game NLDS with the Philadelphia Phillies (batting .227 overall) before falling to .167 (3-for-18 with a double and two RBI) in the NLCS loss to the Los Angeles Dodgers.

When the Expos acquired first baseman Al Oliver before the 1982 season, Warren moved full time to right field for the next two seasons. His .254/.346/.398 line in 1982 was a disappointment, as the Expos struggled to find a regular second-place hitter to hit behind Tim Raines. Warren hit 14 more home runs and drove in 62 runs but was constantly battling for time following the acquisition of Joel Youngblood in August. He bounced back in 1983 with a .278/.352/.386 line, but only 3 homers, fighting off a charge from Terry Francona to keep his place in the lineup for 120 games (Francona claimed the regular job in September, relegating Warren to the bench). Warren was an above average hitter both years, with an OPS+ of 107 and 106 respectively. He was very popular in Montreal, because of his outgoing personality and sense of humor. He was also a very thoughtful and intelligent man behind the fun exterior, qualities that would serve him well in future years.

He normally would have been re-signed after the 1983 season, but baseball was moving into an era of collusion, and he was never given a serious offer. The Expos were moving on from much of the core that had got them to the postseason promised land, and Warren was merely the next link to their quest to move along. After being a regular presence for the Expos for nearly a decade, he left to play in Japan in 1984 for the Yomiuri Giants. He was a major star in Japan and was extremely popular for showing genuine interest in Japanese culture. Sadaharu Oh, his manager, corrected a hitch in his swing upon arrival that harnessed his power stroke. In each of his first three NPB seasons, Warren mashed 30-plus long balls. He earned Best Nine honors in 1986, 1987 and 1989 and was Central League Most Valuable Player in 1989, batting .378/.449/.560 with 15 homers, 33 doubles and 72 RBI. He led the Giants to a Japan Series title, the lynchpin of the deciding game's rallies with a home run and a double. After seven seasons there (in which he hit .321 with 171 home runs), he returned to the US in 1991 with the Kansas City Royals, hitting .313/.381/.420 in 69 games as a lefty bench bat, ending his career.

A whiz on the drums, Cro is one of the few big leaguers to have jammed with Rock & Roll Hall of Famers Rush. The group featured a blueprint for the Warren Cromartie Secondary School with their 1982 album Signals. He also formed an R&B group for a spell, Climb, along with David Rosenthal of the British rock band Rainbow. Warren's autobiography, Slugging It Out in Japan: An American Major-Leaguer in the Tokyo Outfield was released around the time of his return to Major League Baseball with Kansas City.

Following his playing days, Warren was a broadcaster with the Florida Marlins from 1997 to 2002. In 2003 and 2004, he was a guest analyst on English-language radio broadcasts of Expos games; play-by-play man Elliott Price did not have a regular partner in the booth for cost-cutting reasons, and various persons worked with him for a nominal fee in order to gain exposure; Cro was among the best who joined Price in the booth, but he had no plans of making it a career. In 2005, he took the reigns of the Japan Samurai Bears of the Golden Baseball League as manager. Cro later hosted a radio show in Miami and had a segment on a sports station on Montreal's airwaves that aired on weekdays.

In June 2007, Cromartie took part in a wrestling event to raise money for charity in Japan. Teaming with Ryoji Sai against Tiger Jeet Singh and An Joenosuke, Cro wore a jersey reading "Samurai Man" with his old number 49 and wielded a baseball bat to counter Singh's trademark sword. He pinned Singh for the duke and shouted "Bonzai!" in celebration.

In 2012, Cromartie founded the "Montreal Baseball Project", a group dedicated to bringing MLB back to the city where he had enjoyed his greatest success. The group sponsored a thorough economic feasibility study that outlined the costs and potential returns of MLB in the city. In March 2014, he was instrumental in bringing in the Toronto Blue Jays to play a couple of exhibition games against the New York Mets at Stade Olympique. Fans turned out in huge numbers to the games, most of them sporting Expos gear, underlining his claim that the love for baseball remained undiminished in the French-speaking metropole.

"If anybody can do it, Warren Cromartie can do it. When he puts his mind to something, he doesn't stop until it's done." - Tim Raines, commenting on Cromartie's efforts to bring MLB back to Montreal

This manager's article is missing a managerial chart. To make this person's article more complete, one should be added.
Retrieved from "https://www.baseball-reference.com/bpv/index.php?title=Warren_Cromartie&oldid=1255879"
Categories:
Hidden category: