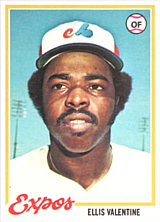 "They say that I can't throw like Ellis Valentine or run like Tim Raines or hit with power like Mike Schmidt. Who can? - Pete Rose, using Ellis Valentine as his example of the best arm in the National League.

"There's a plateau where you can't throw the ball any harder and you can't be any more accurate. That was Ellis Valentine." - Felipe Alou

As a young player, he was part of the vaunted Expos outfield that included Andre Dawson and Warren Cromartie, with all three of them being around the same age. Valentine may have had the highest hopes pinned on his shoulders for success, but he unfortunately battled drug and alcohol addiction throughout his career. He suffered a shattered cheekbone via a pitch from Roy Thomas of the St. Louis Cardinals in 1980 and after a slow start in 1981, was dealt to the New York Mets in exchange for future Expo closer Jeff Reardon, among others. From there, he muddled through several seasons as a Met (an organization he dubbed "the worst in baseball" during the dog days of summer 1982), an Angel and a Texas Ranger before retiring in 1986.

Ellis appeared in a 1978 episode of Fantasy Island, in which guest star Gary Burghoff (M*A*S*H) dreams of being a professional baseball player. Ellis becomes one of his strikeout victims. He is one of seven major leaguers (through 2019) with the last name Valentine.