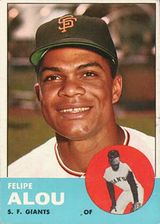 "Felipe was really the first, the guy who cleared the way. He was an inspiration to everybody [in the Dominican Republic]. He was a good example." - Manny Mota

Part of one of the great baseball families of all-time, Felipe Alou was a three-time All-Star during a 17-year big league playing career. He later was a successful manager in the majors.

Despite growing up in poverty in the Dominican Republic, Alou excelled in track, setting a national record in javelin (later broken by Carlos Bernhardt). He was supposed to compete in sprints and javelin at the 1955 Pan American Games but at the last minute was moved to the Dominican baseball team instead. The team went on to capture the gold medal, Alou hitting .353. Alou did not intend to pursue a pro baseball career; instead, he had been accepted to study pre-med at the University of Santo Domingo. When his father and uncle both lost their jobs, he was signed by New York Giants scout Horacio Martinez in late 1955 for just $200.

Alou began his pro career in 1956 with the Lake Charles Giants, becoming one of the first black players in the Evangeline League. When the circuit threatened to expel the team, he was sent to the Cocoa Indians of the Florida State League after just 5 games. He went on to hit a league-leading .380 with 21 home runs and paced the circuit with 48 stolen bases. He began the following year with the Minneapolis Millers. but after hitting just .211 in 24 games, he was sent to the Springfield Giants, for whom he hit .306 with a dozen homers. 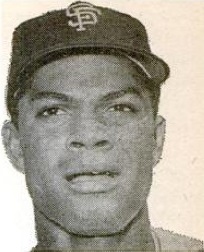 Alou started the 1958 season with the Phoenix Giants, hitting .319 with 13 home runs in 55 games before being called up to the Giants (now in San Francisco) in early June; he would never again play in the minors. He made his big league debut on June 8th, going 2-for-3 with a double and an RBI against the Cincinnati Reds to become the second Dominican major leaguer (Ozzie Virgil was the first). In 75 games that year, he hit .253 with 4 home runs. That winter he won the Dominican Winter League MVP award, and set a record for batting average with a mark of .351. He also set marks with 43 RBIs, 45 runs scored, 14 doubles, 17 stolen bases, and 85 hits. Over the course of the next two seasons, he hit 18 home runs, but he was stuck behind Willie Mays, Orlando Cepeda, and Willie Kirkland in the crowded San Francisco outfield and only saw limited playing time. His brother, Matty, who had signed with the Giants in 1957, joined Felipe on the Giants roster late in the 1960 campaign.

Manager Al Dark took over the Giants in 1961 and installed Alou in right field alongside Mays and Harvey Kuenn. He responded by hitting .289 with 18 homers. He had his best year with the club the following summer, posting a .316 average along with 25 home runs to earn a spot on the NL All-Star squad. His team reached the World Series that year, and Dark used him all over the lineup; he batted, in various games, leadoff, second, third, cleanup, and sixth, but San Francisco fell to the New York Yankees in seven games. On September 10th of the following year, brother Jesús joined Felipe and Matty on the Giants; in the eighth inning of that day's game against the New York Mets, all three brothers were retired in order by pitcher Carl Willey. Five days later, facing the Pittsburgh Pirates, the Alous played together in the outfield for two innings.

Following the 1963 season, Alou was traded to the Milwaukee Braves as part of a seven-player deal. Splitting time between first base and outfield, he hit just .253 with 9 homers in 1964 while missing a month of the season with a knee injury. He bounced back the next summer, batting .297 with 23 home runs. The Braves moved to Atlanta in 1966, and he went on to put together his finest season that year, hitting .327 with 31 homers while leading the National League with 218 hits, 122 runs scored, and 355 total bases. He also finished second in the league in batting average, behind his brother Matty, now with Pittsburgh, the only time in baseball history that brothers finished 1-2 for the batting title. He again put up great numbers in 1968, posting a .317 average while tying Pete Rose for the NL lead with 210 hits. Alou was dealt to the Oakland Athletics after the 1969 season for pitcher Jim Nash. Early in the 1971 campaign, he was then traded to the New York Yankees, for whom he played the better part of three seasons. Following a brief stint with the Montreal Expos, he played his final three big league games for the Milwaukee Brewers in 1974. 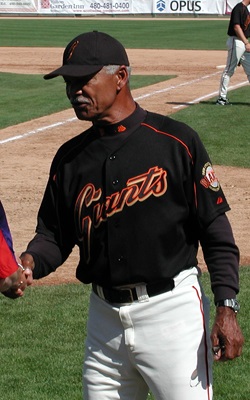 "The biggest mistake I’ve made in my career was not recognizing his ability then to be a terrific major league manager. He’s one of the best in the game." - Expos GM Dan Duquette

Following his playing days, Alou was a spring training instructor for the Expos in 1976 and began his minor league managerial career the following summer. He joined Montreal's coaching staff for two seasons, starting in 1979, before leading the Denver Bears to an American Association championship in 1981. After another stint as an Expos coach in 1984, he managed several more years in the minors, principally with the West Palm Beach Expos of the Florida State League, before rejoining the Montreal staff in 1992. On May 22nd, he succeeded Tom Runnells as skipper of the team, becoming the first Dominican manager in major league history. He took the team from a sub-.500 record to a second-place finish that year with a roster consisting of, among others, his son, Moises Alou, and his nephew, Mel Rojas. Following another second-place finish in 1993, he led Montreal to a 74-40 record - the best in all of Major League Baseball - in 1994 before a strike ended the season. Nonetheless, he won the NL Manager of the Year Award.

After losing stars Larry Walker, Marquis Grissom, Ken Hill and John Wetteland in the offseason, Alou's Expos fell to last place in 1995. He was named the manager of the National League squad in the 1995 All-Star Game, in spite of MLB not officially recognizing that Montreal had won a pennant the previous season. The Expos bounced back to another second-place finish in 1996, just falling short of a wild card spot. Despite declining fortunes in the following years, he remained the manager until early 2001, when he was replaced by Jeff Torborg, a personal favorite of new owner Jeffrey Loria. He spent part of 2002 on Luis Pujols' staff as bench coach of the Detroit Tigers; Pujols had earlier served as bench coach under Alou in Montreal.

Alou replaced Dusty Baker as manager of the Giants in 2003 and led the club to a 100-win season and a division title. They fell to the Florida Marlins in the NLDS. He remained at the helm of the team for three more seasons. He held the record for most wins by a manager born outside of the USA until 2008, when Bruce Bochy surpassed him. After 2007, he became a Special Assistant to San Francisco General Manager Brian Sabean.

Alou had the unique distinction of being a teammate of his brothers Matty and Jesús with the Giants in 1963. He also managed his son, Moises, with the Expos from 1992 to 1996 and again with the Giants in 2005 and 2006. His nephew, Mel Rojas, also played for Alou in Montreal. Three other sons, Jose Alou, Felipe Alou Jr. and Luis Rojas, played in the minors, and Luis became a major league manager, like his father, with the New York Mets in 2020. Jose played for him at West Palm Beach in 1988 and 1989. His sons are from his first marriage (he also had four daughters); his two children from his second marriage, a son and a daughter, have not been involved in baseball. His cousin, José Sosa, also played in the majors.

Alou's paternal surname is actually Rojas. Early in his playing career, he was incorrectly called by his mother's name, Alou. The error went uncorrected, and when his brothers and sons began their pro careers, they used the Alou name as well. His youngest son from his first marriage, Luis, reverted to the original family name of Rojas.