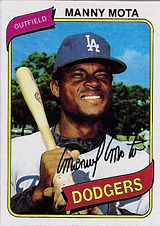 Manny Mota did one thing very well for parts of twenty seasons in the National League: hit singles. From 1966 to 1973, he batted over .300 in seven of eight seasons for the Pittsburgh Pirates, Montreal Expos and Los Angeles Dodgers, usually as a platoon outfielder, facing left-handed pitchers. The native of the Dominican Republic finished his career with a .304 lifetime batting average.

Beginning in 1974, the right-handed Mota became a lethal pinch hitter, beloved by Dodger fans for his ability to knock in runs with line drive singles in the late innings. Longtime Dodger announcer Vin Scully once said that Mota could wake up on Christmas morning and hit a line drive to center. Jim Murray, Los Angeles sportswriter, once wrote that you could wake Manny up at 2 AM, hand him a toothpick, throw an aspirin tablet toward him, and he would hit it for a line drive single to right. 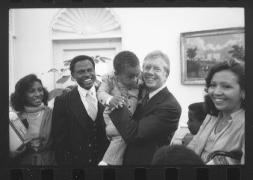 On September 29, 1979 at Dodger Stadium, Dodger manager Tommy Lasorda called on the 41-year-old Mota to bat for pitcher Jerry Reuss in the 8th. Mota singled off the Houston Astros' Joe Sambito for his 146th career pinch hit, breaking the record set by Smoky Burgess. The record was later broken by Dodger Lenny Harris on October 6, 2001. The Dodgers thought enough of the geriatric Mota's pinch-hitting prowess to activate him at the end of both the 1980 and 1982 seasons to use in that capacity.

Manny met President Jimmy Carter at the White House on October 9, 1979 for a quick 15-minute photo-op. See [1] for the President's diary outlining the visit.

Since 1980, Mota has been a member of the Dodgers family in various capacities, including as the club's hitting coach from 1980 to 1989. Beginning with the 2014 season, he became the color commentator on Spanish-language broadcasts for SportsNet LA.

Two of Manny's sons (Jose Mota and Andy Mota) followed him to the majors while another son (Gary Mota) won an MVP award in the South Atlantic League. Yet another son, Tony Mota, had a less successful minor league career. A cousin, Jose Baez, also played in the majors.

Fifty-two spectators are known to have been killed by foul balls since 1887, two in pro games. In May 1970, a foul liner from Mota killed a 14-year-old fan named Alan Fish in Los Angeles. To this day many Dodger fans remember Mota more for this incident than anything else he had accomplished on and off the field.