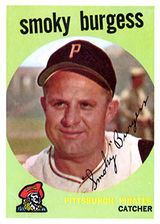 “You could wake (Burgess) up at 3 a.m. on Christmas morning, with two inches of snow on the ground, throw him a curveball, and he’d hit a line drive.” - Joe Garagiola, to Rick Cushing, in the book 1960 Pittsburgh Pirates, Day By Day

“Everything went well, I have no regrets. I don’t know a thing I would have changed. If I hadn’t played baseball, I would have probably had to work in the cotton mills. That’s real hard work. I’m certainly glad I had baseball.” - Smoky Burgess, in The Phillies Encyclopedia, 3rd Edition 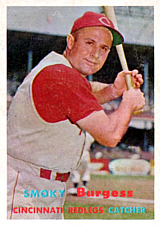 Smoky Burgess is considered by many the greatest pinch hitter of all time, even if most of his records have since been broken. A six-time All-Star, he was a top-flight catcher early in his playing days but kept his uncanny ability to hit fastballs even when all his other skills, and especially his foot speed, were long gone. As deft with the leather as with the bat, Burgess led NL backstops in fielding percentage three times, and placed third, fourth, and fifth other seasons.

Originally signed by the Chicago Cubs, Burgess began his pro career with the Lockport Cubs of the PONY League in 1944. He missed most of the next two years due to military service, then led the Tri-State League with a .387 average for the Fayetteville Cubs in 1947. After winning the Southern League batting crown the next year, he earned cups of coffee in the majors with the Cubs in 1949 and 1951. Following the latter season, Smoky was traded to the Cincinnati Reds, who flipped him to the Philadelphia Phillies two months later. He was the Phillies' starting catcher for the next three years, hitting .368 in 345 at-bats and making the All-Star team in 1954. Early in the 1955 campaign, he was traded back to the now Redlegs. That season, he hit a career-best 21 homers, including 3 against the Pittsburgh Pirates on July 29th. During the next three years with the Redlegs, he began seeing less time behind the plate and more appearances as a pinch hitter.

Prior to the 1959 season, Burgess was acquired by Pittsburgh. He was the team's primary catcher for four seasons and hit .333 in the 1960 World Series, which the Pirates won. By 1963, Jim Pagliaroni took over as the starter, but the next year Burgess became the only player to ever make the All-Star team primarily because of his ability as a pinch hitter. Late in the 1964 campaign, he was acquired by the Chicago White Sox, who were in the heat of the pennant race. In his first plate appearance with the Sox on September 15th against the Detroit Tigers, he hit a game-tying homer off pitcher Dave Wickersham. Over the next three years, he was used almost exclusively as a pinch hitter, appearing just 7 times behind the plate in 236 games. He led the American League in pinch hits in 1965 and 1966. Portly, slow, and too valuable to get injured on the base paths, he was routinely pinch run for. In 1966, he set the record for most at-bats in a season (67) without scoring a run as well as the marks for most hits in a season (21) and most RBI (15) without scoring. After posting excellent (for a pinch-hitter) .286 and .313 averages at 38 and 39 in 1965 and 1966, the bell tolled in 1967, and he retired on the heels of a dismal .133 campaign.

In 18 years in the majors, Burgess topped .300 in batting average six times, en route to a career .295 mark. He was consistent, four times hitting within three points of his career mark, bracketing it with .292, .294, .296, and .297 seasons. When he retired, he was the runaway major league leader in pinch hits, his 145 (since broken by several players) far outpacing then second best Jerry Lynch's 116. During the course of his big league career, the only defensive position Burgess played was catcher.