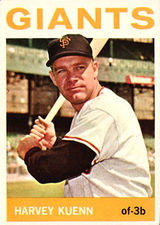 Harvey Kuenn was a regular .300 hitter, starting with his rookie season, coming from the University of Wisconsin-Madison. He gradually became considered as one of the American League's elite batsmen with the Detroit Tigers, with whom he was a top-ten hitter six times. During eight of his ten first full seasons as a regular, Kuenn hit over .300.

He hit off his front foot, which reduced his power. A singles and doubles hitter, he possessed tremendous bat control, spraying the ball to all fields. As a great contact hitter, who neither walked nor struck out very much, fielders knew that Kuenn would usually put the ball in play. Though a capable shortstop, but not especially quick or flashy, he was later changed into an outfielder. He also did a few stints at third base. As a rookie in 1953, he led the A.L. in at bats, with 679.

In one of baseball's most controversial, daring and historical trades, after the 1959 season, Cleveland Indians General Manager and master trader "Frantic Frankie" Lane traded A.L. home-run champion Rocky Colavito to Detroit for popular Kuenn, who was the reigning batting champion. Indian fans were outraged, since Rocky was their "Bobby-Socks" hero. Later, Kuenn played with distinction for the San Francisco Giants. However, his sterling career was in a slow, gradual decline after leaving Detroit. Only twice more did this elite batsman hit .300, and he bottomed out at .223 in 1965.

After his playing career ended, Kuenn joined the Milwaukee Brewers coaching staff in 1971 and served as the club's interim manager briefly in 1975. He took over full-time as the Brewers' skipper in 1982, replacing Buck Rodgers, and led a team known as "Harvey's Wallbangers" for its hitting prowess to the World Series, where they were beaten in 7 games by the St. Louis Cardinals.

Kuenn was beset with a series of medical issues while serving as hitting instructor for the Brewers. He had quadruple bypass surgery in 1976 and, following a blood clot, had a leg amputated below the knee in 1980.

Kuenn was also known for his large chaw of chewing tobacco which always graced one cheek. His son Harvey Kuenn, Jr. played briefly in the minors then became a scout.