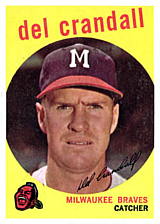 Del Crandall was one of the top catchers of his era. He was an eleven-time All-Star, highly esteemed for his catching skill while no slouch with the bat either (179 career home runs). Playing most of his sixteen-year major league career with the Boston/Milwaukee Braves, he led the National League in putouts, assists and fielding percentage on multiple occasions.

Born in Ontario, CA, also the birthplace of Prince Fielder, Crandall signed in 1948 with Lou Perini's Braves and came up at just 19 in 1949, catching 67 games. He saw action in another 79 in 1950 before the Korean War enlisted his services for both 1951 and 1952. By the time he returned in 1953, the team had relocated to Milwaukee, now featuring young power hitters at the corners (Joe Adcock and Eddie Mathews), an exciting young speedster in center field (Bill Bruton) and promising hurlers like Lew Burdette and Bob Buhl flanking Warren Spahn. The best of all, Hank Aaron, was a year away as Del settled into first-string receiving duties, a position he would hold for the next eight years. Del made his first All-Star team that summer, en route to a .272/.330/.429 line with 15 home runs.

Every year from 1953 to 1959 (excluding 1955), the Braves pitching staff rated near the top of the heap in ERA, with Del playing a big part in their success with his work behind the dish. Not surprisingly, the team was habitually in contention. His bat was certainly a bonus, belting 21 home runs in 1954 followed by a personal best 26 in 1955. On September 11, 1955, he walked-off the first game of a double dip with the Philadelphia Phillies by belting a grand slam off Herm Wehmeier, part of a five run bottom of the ninth to seal a 5-4 win. He made it four All-Star Games in a row when he blasted 16 home runs in 112 games in 1956.

The Braves returned to the World Series in 1957, winning their second world title with Del routinely batting eighth in the lineup. He hit .253/.308/.410 with 15 homers in the regular season, chipping in another in the deciding game of the Fall Classic over the New York Yankees. Crandall returned to both the All-Star Game and the World Series in 1958, batting .272/.348/.457 with 18 home runs, 23 doubles and 63 RBI in 130 games. He moved up to sixth and seventh in the Series, batting .240 with another Game 7 home run... only for the Yankees to take the title with a late rally. His regular season performance was strong enough to finish 10th in MVP voting and become the proud recipient of a Gold Glove, the first of three in a row he would win.

When he retired, Del was among catching leaders in a multitude of categories. He ranked fourth in putouts, eighth in total chances and fifth in fielding percentage. Among National League backstops, he ranked fourth in home runs as well as games caught. His 45.44% in throwing out base stealers still ranks eighth all-time, even more impressive when you consider how little the running game was utilized during his day. Because he played more games each season than one might expect at catcher, the similarity scores method chooses players from a variety of positions as most similar, and most of them do not seem good comparisons. Perhaps the best comparisons are his contemporaries Sherm Lollar and Elston Howard.

Crandall managed many years in the minors, perhaps most notably spending eight years with the Albuquerque Dodgers and Albuquerque Dukes as part of the Los Angeles Dodgers organization. In 1969, he managed the young Steve Garvey and Ron Cey. In 1979, he managed another generation of young Dodgers such as Pedro Guerrero, Mike Scioscia and Mickey Hatcher. After stints as manager of the Milwaukee Brewers (1972 to 1975) and Seattle Mariners (1983 to 1984) and a season as a California Angels coach (1977), Crandall was a radio broadcaster for the Chicago White Sox from 1985 to 1988 and the Brewers from 1992 to 1994. He managed the San Bernardino Stampede from 1995 to 1997.

As of 2020, Del and Bert Thiel are the lone surviving members of the fraternity of Boston Braves players.