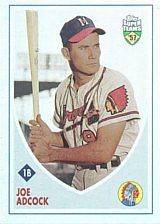 “That’s how I earn my living. Hitting, I mean... You’ve got to make up your mind – do you run away from pitches or stay in there and hit? There are a dozen different stances but I’ve got to use the one that’s natural for me and stay in there.” - Joe Adcock, to Red Smith, 1955

First baseman Joe Adcock was one of baseball's top sluggers in the 1950s and early 1960s, clubbing 336 homers during a 17-year career, primarily with the Milwaukee Braves. His blasts were routinely of the tape measure variety, doing much of his damage for the Milwaukee Braves.

Nicknamed "Billy Joe", Adcock spent one year at Louisiana State University on a basketball scholarship. He had never played baseball until he suited up with the LSU Tigers and impressed enough on the ballfield to be signed by the Cincinnati Reds in 1947. Taking to first base, Joe reached the summit in 1950 but found a roadblock in the form of the rippling muscles of Ted Kluszewski. The Reds tossed him into left field, initially part time, but his bat was too good to keep him out of the lineup, hitting .293/.336/.406 in 102 games. Left field at Crosley Field, Cincy's home park, could be death on one's knees. Joe wanted out, especially after missing time each of the next two seasons with knee maladies, but unable to supplant Kluszewski's production at first. And so, before the 1953 season, Joe was included in a deal that shipped him off to Milwaukee.

The move was a good one for Joe's career. He joined a lineup that included Hall of Fame third baseman Eddie Mathews with Hank Aaron due to join them in a year's time. Power, not a hallmark of his game in Cincinnati, was about to become a big part of his career. In just his first month as a Brave, Joe dug in to face Jim Hearn of the New York Giants on April 29th and belted a 475-foot bomb at the Polo Grounds, becoming the first man to launch a ball into the park's center field bleachers since the park's 1923 renovations. At Forbes Field on July 18th, he took Jim Waugh of the Pittsburgh Pirates deep in clearing the cavernous park's 457-foot sign, nearly all the way to dead center field. Playing 157 games, Joe hit .285/.334/.453 with 18 homers and 80 RBI, a fine Braves start.

The 1954 season saw him perk up to .308/.365/.520 with 23 home runs and 87 RBI in 133 games. On July 31st, he may have had the best single offensive performance in major league history. Facing the Brooklyn Dodgers at Ebbets Field, he hit four home runs along with a double, setting a single-game record for total bases with 18. His reward, on August 1st, was a Clem Labine heater to the skull. In fact, had Adcock not been wearing one of the new batting helmets that had been recently introduced, the result could have been far more dire. He was able to return the next day, then victimized dem Bums at Ebbets again on September 9th, setting another record by belting nine homers in Brooklyn in one season. In the ensuing game, he was again plunked, this time breaking his thumb and ending his season. His 1955 season would end similarly, taking a wayward toss from a man he had previously victimized big time, Jim Hearn. He hit .264 with 15 homers in 84 games in that abbreviated season.

In 1956, he had the best year of his big league career, finishing second in the National League in home runs (38), RBI (103), and slugging percentage (.597), batting .291/.337/.597 in the process. These totals were especially impressive when one considers "Jolly Cholly" Grimm had started the year platooning Joe with Frank Torre at first base. Joe's July was record-setting, belting 15 home runs along with 36 RB,I coupled with a charge of the mound (ultimately into center field) at County Stadium of Ruben Gomez of the Philadelphia Phillies, due to Joe's perception that teams were headhunting him. He appeared in the World Series with the Braves in 1957 and 1958 but was finally forced into platooning with Torre on a regular basis over the next three seasons. This did not mean he did not have any signature moments. He is perhaps best remembered for breaking up baseball's longest no-hitter on May 26, 1959. After Harvey Haddix of the Pittsburgh Pirates had pitched twelve perfect innings, Joe hit a home run in the 13th inning to drive in Felix Mantilla and give the Braves the win. It was not scored as a homer as he inadvertently passed Hank Aaron on the base paths and was called out, his purported three-run blast reduced to a run-scoring single in the final statistics. The Braves finished tied for first place with the Los Angeles Dodgers at the end of the regular season, necessitating a three-game playoff to determine which team would win the pennant. The Braves lost the opening game, and in a bizarre turn of events, it was Torre, hitting .228 on the year with no power who was the Braves' clean-up hitter in the season-deciding game on September 29th, with Adcock sitting on the bench, as manager Fred Haney wanted a lefty to face Don Drysdale. Joe only came in as a pinch-hitter in the 11th inning and the Braves lost the game, 6-5, in 12 innings.

In 1960, Adcock earned his only trip to the All-Star Game, playing in both of the games played that year, and ended the season seventh in the NL in batting average (.298), homers (25), and slugging percentage (.500). On April 14th, his blast off Curt Simmons was the first struck by a right-hander (and third total) to clear the 64-foot high scoreboard at Connie Mack Stadium in a duel with the Philadelphia Phillies. The next year, 1961, he was fourth in the NL with 35 home runs and sixth with 108 RBI, hitting .285/.354/.507. On June 8th, Mathews, Aaron, Adcock and Frank Thomas belted back-to-back-to-back-to-back homers against the Reds, the first time that had happened in big league history. After the 1962 season, in which he hit 29 home runs while batting .248/.333/.506, he was traded to the Cleveland Indians, who after one year as a platoon player, traded him to the Los Angeles Angels, where he spent the last three years of his playing days from 1964 to 1966. Even in his final season, he still had some magic in that bat of his, taking Mickey Lolich of the Detroit Tigers very deep with a blast just under the left field roof at Tiger Stadium on July 5th. Two months later, on September 2nd, he hit a ball thrown by Bob Humphreys of the Washington Senators off a light tower in Anaheim Stadium. That season, he led the team with 18 homers while appearing in only 83 games. During his career, Adcock had 10 grand slams and 28 multi-homer games. During his time with the Braves, he wore number 9.

After retiring, Adcock was skipper of the Cleveland Indians in 1967, a team that finished eighth, and spent one more year managing in the minors. Near the end of his playing career, he had begun breeding thoroughbred racehorses, and following his baseball days, he devoted himself to that pursuit full-time. He died in 1999 after suffering from Alzheimer's disease.