The Milwaukee Braves moved to County Stadium from Boston in 1953. The park, set in the Menominee River valley next to the Veterans Home, saw three World Series during its lifetime, and two All-Star Games. The first game was played on April 14, 1953, with the Braves defeating the St. Louis Cardinals, 3-2. The final game saw the Cincinnati Reds defeat the Brewers, 8-1, on September 28, 2000. 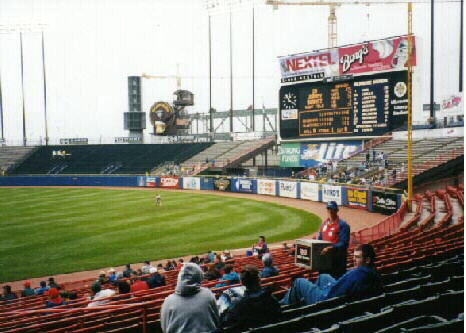 Among the important baseball events that happened here during that time:

The ballpark was renovated several times during its existence, beginning with the addition of an upper deck once it was announced the Braves were moving to the city.

The most notable feature in the park during the last half of its existence was the larger Beer Barrell in center field, with a chalet where the Brewer mascot "Bernie Brewer" slid down into a large beer mug.

The park was home to bratwurst and "secret stadium sauce," and featured a sausage race in the middle of the game. Fans sang "Roll Out The Barrel" after singing "Take Me Out To The Ballgame for the seventh inning stretch.

The interior scenes to the movie Major League were filmed here.

Current Site: Helfaer Field, a little league-sized ballpark, is on the approximate footprint of the stadium's field. Home plate is located in the third-base concourse of the park. A monument to the Milwaukee Braves is located just outside of the park, down the left field line.