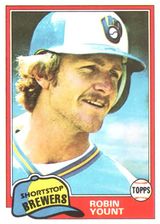 Hall of Famer Robin Yount played 20 seasons in the majors, all with the Milwaukee Brewers, and surprised fans when he retired at the age of 37, still capable of playing decent baseball. He was the 3rd youngest player in major league history to reach 3,000 hits, reaching the mark at 36 years, 359 days old. It had been widely expected that Yount would try to reach 4,000 hits, but never one to seek the limelight, he preferred to hang up his cleats while still relatively young.

Despite retiring "early", through 2019 he ranks 16th on the all-time list in games played, 21st in doubles, 19th in hits, 9th in at-bats, 40th in runs scored, 36th in total bases, and tied for 77th in RBI (with Todd Helton). Additionally, he stole 271 bases and slugged 251 home runs, which was the highest total in the history of the Brewers until Ryan Braun passed him in 2015. 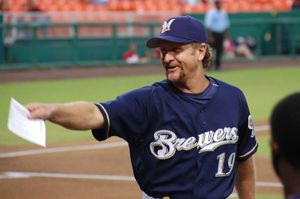 He came up with the Brewers in 1974, at age 18, as the youngest player in the American League and was still the youngest player the following season, 1975, when he was a teammate of a 41-year-old Hank Aaron. He played only half a season in the minor leagues, 63 games for the Newark Co-Pilots of the New York-Penn League in 1973 before manager Del Crandall decided to make him his Opening Day shortstop in 1974; 23-year-old Tim Johnson had manned the position in 1973, and while he was a reliable fielder, he hit only .213 with no power and hardly any walks. Crandall determined (correctly) that even while learning on the job, Yount would be the better player. Robin moved to the outfield in 1985, with rookie Ernie Riles taking over at shortstop; the Brewers considered the toll of continuing to play shortstop every day would eventually hurt Yount's bat and force him to miss time. That decision turned out to be wise as well, even if Riles did not develop into a star despite a strong rookie season.

According to the similarity scores method, the most similar players to Yount are a truly impressive group of infielders, all of them Hall of Famers: Craig Biggio, teammate Paul Molitor, Brooks Robinson, George Brett, and Cal Ripken.

Yount will be forever linked with George Brett. Among the coincidences in their careers:

He was elected to the Baseball Hall of Fame on January 5, 1999 by the Baseball Writers Association of America in his first year of eligibility. His #19 was retired by the Brew Crew in 1994 and he was inducted into the Milwaukee Brewers/Miller Park Walk of Fame with the inaugural class of 2001. The Yount Monument has been located outside of Miller Park since its opening in 2001.

Following his playing career, Yount was a coach for the Arizona Diamondbacks from 2002 to 2004. He rejoined the Milwaukee Brewers as a bench coach during the 2006 season.