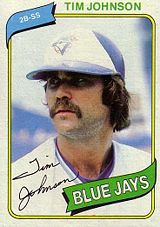 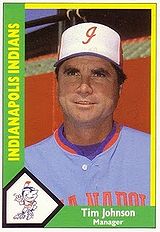 Tim Johnson was a Montreal Expos coach in 1993 and 1994 and a member of the Boston Red Sox staff in 1995 and 1996. He was fired as manager of the Toronto Blue Jays in spring training 1999 not long after admitting he lied to his team about his military service in Vietnam. He was a member of the United States Marines but did not participate in combat, as he had claimed. The firing ocurred in spite of his doing an excellent job in his one year at the helm of the Blue Jays in 1998.

A product of the Los Angeles Dodgers farm system, Johnson had been a light-hitting infielder in the 1970s, playing for the Milwaukee Brewers and Toronto Blue Jays from 1973 to 1979. He was the Brewers' regular shortstop as a rookie in 1973, but lost his job to Robin Yount the following season and missed almost all of the 1975 season because of an injury. He hit .223 without a home run in over 500 major league games.

Johnson has been a very successful manager in the minors both before and after his aborted stint as a major league manager. Unfortunately, his bridges have been burned in organized baseball, and he has only managed in the Mexican League and the Independent Leagues since his firing under ignominious circumstances by the Blue Jays in 1999.

Prior to being a manager, Johnson worked for the Major Leagues Central Scouting Bureau from 1980 to 1982 and as a scout for the Los Angeles Dodgers from 1982 to 1986. He was the Montreal Expos' advance scout in 1991 and 1992. He also managed successfully in the Winter Leagues taking Hermosillo of the Mexican Pacific League to the Caribbean World Series in 1989-90.