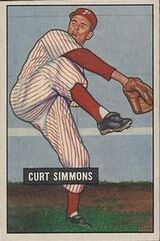 As a teenager Curt Simmons was the most sought-after high school pitching prospect in America, received the largest bonus ever offered to sign with a big league club, and was the youngest player in the Majors when he reached them in 1947 at age 18. While he failed to live up to such early promise he proved to be solid if somewhat hard-luck starter over a 20-year career, winning 10 or more games nine times en route to a 193-183 record. Although he rarely led the league in any category he was often in the top ten, as his 128 points against an average Hall of Fameer's 185 on the Gray Ink test show.

Simmons was a big star at Whitehall High School near his hometown of Egypt, PA in the Lehigh Valley and for American Legion teams in the area. He was picked to play in the East-West American Legion All-Star Game at the Polo Grounds in New York, NY on August 28, 1945. He played for a team managed by Babe Ruth, with Carl Hubbell as a pitching coach, against one managed by Ty Cobb. In the game, he pitched four innings, then moved to the outfield, where he singled in a run, then drove in a second run with a 9th-inning triple and scored the tying run, in a game his team went on to win, 5-4. He was named the game's MVP and Ruth advised him to give up pitching in favor of hitting. He didn't follow the Babe's advice, and as a high school senior in 1947, he struck out 102 batters, while allowing only 12 hits in 43 1/3 innings; he also batted .465 with good power. In brief, he was one of the most sought-after players in the country, so much that his father arranged with Philadelphia Phillies scout Cy Morgan for the major league Phillies to play an exhibition game in Egypt in order to showcase the youngster. The game took place on June 2, 1947, and the 18-year-old Simmons managed to keep the major leaguers in check, the game being called a 4-4 tie because of darkness at the end of 9 innings. At this point, there was a veritable frenzy to sign Simmons, but the Phillies had earned the right of last refusal by making the trip to the small town, and took out their wallets, issuing a $65,000 signing bonus to Curt, the largest ever paid up to that point.

Under the bonus rule of the time, Simmons could only pitch in the minors for one season before the Phillies were forced to keep him on their major league roster or risk losing him for the cost of a waiver claim. He made the most of that one season of apprenticeship, going 13-5, 2.69 while striking out 197 in 147 innings for the Wilmington Blue Rocks of the Interstate League in 1947. He earned a late-season call-up, and was the youngest player in the league when he came up to make a start against the New York Giants in the second game of a doubleheader at the Polo Grounds on September 28th, the last day of the season. He held the Giants scoreless through 8 innings before giving up a 9th-inning run, struck out 9 batters and allowed only 5 hits in winning the game, 3-1. As required, he was with the Phillies for the next two seasons, struggling a bit with his control, but emerged as an outstanding pitcher in 1950, when he won 17 games against 8 losses as the "Whiz Kids" won only their second National League pennant of the 20th century. But in late August, his National Guard unit was called up to active duty in the Korean War, and he was unable to pitch in the 1950 World Series, against the New York Yankees.

He spent 13 years with the Phillies, coming back from military service in 1952, and was an All-Star three times with the team. Simmons was a good pitcher with decent records who pitched for Phillies teams which were usually under .500. He was regularly overshadowed by teammate Robin Roberts, who was winning around 20 games every year during much of the early and middle 1950s. In the 1960s, he spent parts of seven seasons with the St. Louis Cardinals, pitching and hitting .500 in the 1964 World Series. He had probably his greatest moment ever in Game 3, starting and giving up a single run to the Yankees in 8 innings. With the score tied in the top of the 9th he was lifted for a pinch-hitter, only to see reliever Barney Schultz give up a game-winning homer to Mickey Mantle. He also started Game 6, but was the loser after giving up 3 runs in 7 innings. Still, the Cardinals pulled out a seven-game win over New York, and Simmons got to have a World Championship ring. He was still overshadowed by a teammate when he came to the Cardinals. With the 1964 team which won the World Series, Simmons had an impressive 18-9 record, but Bob Gibson had 19 victories while Ray Sadecki had 20. He then finished out his career with the Chicago Cubs and the California Angels, posting a 2.60 ERA with the Angels at age 38.

The most similar players are listed as Claude Osteen, Larry Jackson and Doyle Alexander.