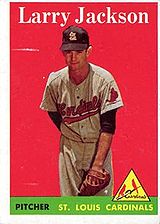 Larry Jackson was a workhorse starting pitcher for the St. Louis Cardinals, Chicago Cubs and Philadelphia Phillies in the 1950s and 1960s. A four-time All-Star, he was in double figures for both wins in losses for 11 consecutive seasons from 1958 to 1968. Pitching for generally mediocre teams, his record hovered around .500 most years, putting him among the league leaders for losses even if he was a significantly better-than-average pitcher (his career ERA+ was 113).

Jackson had a career year for the Cubs in 1964, winning a National League-leading 24 games with a 3.14 ERA in just under 300 innings. There was only one Cy Young Award for both leagues that season, and it was won by the Los Angeles Angels' Dean Chance, but Jackson finished second in the voting and would likely have won the National League award had it existed. On August 19, 1965, he was part of a classic pitchers duel with Jim Maloney of the Cincinnati Reds. Maloney had a no-hitter going after 9 innings but had walked quite a few batters and thrown a ton of pitches; for his part, Jackson had given up a few hits but had kept the Reds from scoring. The game went into extra innings as a scoreless tie, but Leo Cardenas hit a solo homer against the foul pole in left field at Wrigley Field with one out in the top of the 10th for the only run of the game. Maloney put a couple more men on in the bottom of the frame, but did not give up a hit and had a no-hitter, while Jackson ended up with a complete game loss. Ironically, he had come to bat in the 9th with two on and two out, and manager Leo Durocher had let him bat: he drew a walk, but the Cubs where unable to score. Early in the 1966 season, the Cubs traded him to the Phillies in a deal that netted them future Hall of Famer Fergie Jenkins.

After the 1968 season, in which he went 13-17 for the Phillies, but with a solid 2.77 ERA, he was left unprotected in the expansion draft. He was selected by the Montreal Expos, but chose to retire instead of joining his new team. The Phillies were forced to offer the Expos another player as compensation, eventually settling on shortstop Bobby Wine just before the 1969 season started.

After his baseball career, Jackson was elected to four terms in the Idaho House of Representatives and ran for Governor in the 1978 Republican primary, but lost.