Before the 1957 season Bobby Wine was signed by the Philadelphia Phillies as an amateur free agent. His first season of professional baseball saw him with the class D Appalachian League (Short Season) Johnson City Phillies. The 18-year-old infielder appeared in 54 games, got 202 at bats, 68 base hits, including 6 home runs and hit for a .337 average.

Wine was with the International League Buffalo Bisons in 1960, appearing in 154 games, had 569 at bats with 153 hits for a .269 average. He also had a good .958 fielding percentage at the shortstop position. He was also to get his first look at the major league game when the Phillies used him in 4 games. He picked up 2 base hits and fielded his shortstop position flawlessly at a 1.000 percentage.

In 1961 he was back with the Buffalo team where he hit for a .243 average and fielded at a .961 clip. He also spent time in 1962 with Buffalo, hitting .242 and fielding at a .977 percentage. This was to be his last minor league action as he finished out the year with the Phillies, hitting at a .244 average and fielding .979. He played 20 games at third base for the Philadelphia team and did not have an error.

Wine spent the next ten seasons, 1963 through 1972 in the major leagues. He was with the Philadelphia club through 1968 when a back injury let him into only 27 games. He was sent to the expansion Montreal Expos at the end of spring training in 1969 as compensation for pitcher Larry Jackson, who was selected from the Phillies in the 1969 expansion draft but chose to retire rather than join the Expos. His manager all those years in Philadelphia was Gene Mauch, until his firing mid-way through 1968, and Mauch was also the Expos' first skipper, so he knew what he was getting when he asked for Bobby to join the team.

He spent four seasons, 1969 through 1972, with the Montreal Expos hitting around the .220 mark and fielding almost flawlessly. At first he was the back-up to Maury Wills, but he took over for Wills when he was traded to the Los Angeles Dodgers in June 1969, and remained the Expos' starter until they acquired Tim Foli from the New York Mets at the end of spring training in 1972. In the 1970 season Bobby was 5th in the league in games played with 159 to his credit. He posted tremendous double play totals with the Expos over those three seasons, including a then-record 137 in 1970. He was helped by the fact Expos pitchers put a ton of players on base in those early seasons; his double play partner was mainly Gary Sutherland in 1969 and 1970; the two had been teammates for a number of years with the Phillies as well. However, as good as his fielding was, his hitting was generally awful. His best batting average in Montreal was .232 and his on-base percentage always fell below .300, with no power to speak of. He remained with Montreal as a back-up to Foli early in 1972, but played very little - he went to bat only 18 times in over three months - as the more versatile Hector Torres assumed the role of utility infielder. The Expos released him on July 10th, ending his career. 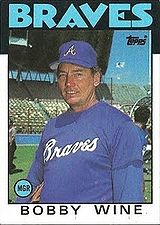 Known for his strong arm, Wine rarely played enough, or enough full games, to accumulate high statistical totals. He was bothered by a bad back and missed most of the 1966 and 1968 seasons because of it. He had surgery for a ruptured spinal disc in 1968.

However, he won a 1963 Gold Glove Award, led the NL in fielding in 1967, and, as mentioned above, he set a ML shortstop record with 137 double plays in 1970. That was in fact his only season with more than 420 at-bats - he had 501. His best batting average came in his rookie 1962 season, when he hit .244. His .215 lifetime average is the fourth-worst all-time with 2,500 or more at-bats, but it also was compiled during the second deadball era, when batting averages were historically low.

After retiring, Wine was a coach for the Phillies from 1972 to 1983 and scouted for the Atlanta Braves from 1984 through 1986. While a coach with Atlanta in 1985, he was named interim manager. He later was a member of the New York Mets staff from 1993 to 1996. He was often rumored to be a future big league manager when he was coaching the Phillies, but it was GM Dallas Green who succeeded Danny Ozark there in 1979, and when he finally got a chance in Atlanta, it was only in an interim capacity.

His son Robbie Wine was a 1983 first round draft pick and a catcher for the Houston Astros, then became the Penn State baseball coach.

He also had a brother, Edward Wine, who was an outfielder and second baseman in 1962 and 1963 for the Quincy Jets, in the Midwest League, and 1963 for the Auburn Mets, in the New York-Penn League. Edward was not as good a fielder as his brother, but had surprising power; he was also a right-handed hitter.