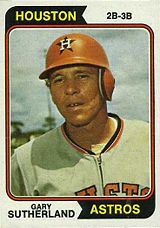 "Sutherland makes the double play as good as anyone who ever played. And that includes Bill Mazeroski and Frankie Frisch and all the rest." - Jack Tighe, Detroit Tigers scout, upon Gary's acquisition in December 1973

Gary Sutherland was a steady and dependable second baseman who had his best seasons with the Detroit Tigers in the mid-1970s. He was even the team's leadoff hitter in 1974 and 1975, a puzzling choice as his on-base percentage was an awful .282 the first year, and he had little speed to compensate. This was a decision of manager Ralph Houk, who had a long history of using his second basemen as leadoff hitters, despite their lack of skills for the job: Bobby Richardson led off for the great New York Yankees teams of the early 1960s, then Horace Clarke after Houk's return to the Yankee bench later in the decade, and Jerry Remy when Houk took over the Boston Red Sox in the 1980s. Sutherland was eventually replaced by Ron LeFlore, a natural lead-off hitter, at the top of the Tigers' batting order.

Sutherland first came up with the Philadelphia Phillies, reaching the majors at age 21 in 1966 for a three-game cup of coffee after only two full seasons in the minor leagues. He spent two seasons with the team in 1967 and 1968, as a back-up at shortstop and in the outfield. He was selected by the newly-formed Montreal Expos with their fourth pick in the 1969 expansion draft and, reunited with former Phils manager Gene Mauch, won the job as the Expos' starting second baseman in 1969, beating out Angel Hermoso and Garry Jestadt in spring training. He was the starting second baseman for the first game in team history, and for the home opener, the first game ever played in Canada. He formed a terrific defensive combination with former Philly teammate Bobby Wine at shortstop - Sutherland turned a league-leading 110 double plays - but neither player hit much. Sutherland put up a batting line of .239/.289/.307 in full-time play that first season. In 1970, he shared playing time with Marv Staehle, who was acquired late the previous season and had shown some promise with the bat. Both fielded well, but neither player hit much, Sutherland ending the year at .206/.271/.259 in 114 games. The Expos knew they needed to find a better bat for the position, and over the winter stole Ron Hunt from the San Francisco Giants. Hunt took over as second base in 1971 and played very well, leaving Sutherland to become a utility infielder. He got in 111 games, hit .257, splitting his time between second base and shortstop. In 1972, he failed to make the team out of spring training after the Expos acquired Hector Torres to be their back-up infielder, and he was sent to the AAA Peninsula Whips. He hit .285 and slugged .403 in 53 games. The Expos then sold him to the Houston Astros on June 13th. He moved to the Oklahoma City 89ers, where he hit a solid .299 in 79 games, which got him a 5-game look with the Astros.

In 1973, Gary Sutherland returned to AAA, this time with the Denver Bears of the American Association. Playing regularly at second base, he hit .294 with 36 doubles to earn another late-season look in Houston. This time, he went 14 for 54 in 16 games, for a .259 batting average. After the season, he was included in a trade of relief pitchers with the Detroit Tigers, with the Tigers receiving Jim Ray in addition to Sutherland in return for lefty Fred Scherman. That's when he was installed as the Tigers' starting second baseman in 1974, playing 149 games, getting 619 at-bats, and hitting .254 with 26 walks, scoring 60 runs out of the lead-off spot. He returned to the charge in 1975, getting into 129 games, with 509 at-bats, a .258 batting average and 51 runs scored. He started the 1976 season in Detroit, but was traded to the Milwaukee Brewers for Pedro Garcia on June 10th; he was hitting .205 in 42 games. Garcia, who took over for him in Detroit, did even worse, hitting .198. With the Brewers, he shared playing time with Tim Johnson, who hit an empty .275 to get the bulk of the playing time; for his part, Sutherland hit an emptier .217, demonstrating his days as a starter were over.

He was released by the Brewers in spring training of 1977 and found a job with the San Diego Padres, where he got into 80 games, backing up Mike Champion at second base and sharing some playing time at third base with rookie Tucker Ashford after Doug Rader was sold to the Toronto Blue Jays in early June. He hit .243 with no power or on-base skills that season, and was released again at the end of the year. This time, he found a job with the St. Louis Cardinals and made the team as a back-up infielder in spring training 1978. He was used in 8 games as a pinch-hitter, going 1 for 6 and twice laying down a sacrifice bunt, and played only 2 innings in the field at second base. On May 26th, the Cardinals gave him his unconditional release, bringing his playing career to an end. In 1,031 games over 13 seasons, he hit .243/.291/.308 with 109 doubles, 10 triples and 24 home runs, scoring 308 runs and driving in 239, while stealing 11 bases in 35 attempts.

After being released by the Cardinals in 1978, he returned home to Monrovia, CA, in the Los Angeles suburbs, where he lived with his wife and three daughters, and tried his hand as a real estate broker. Missing baseball, he approached the Padres for a job, and they took him on as a scout in 1980-1981. During his time there, he recommended signing the great Tony Gwynn. He then moved to the Cleveland Indians organization from 1982-1989 as an area supervisor for California and the Southwest. In 1990 he became a special assignment scout for the Los Angeles Dodgers. He later became a Special Assistant to the General Manager of the Los Angeles Angels of Anaheim, serving from 1999 to 2011.