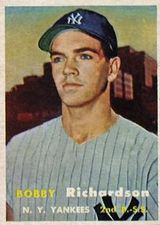 Second baseman Bobby Richardson played 12 seasons for the New York Yankees and was in 7 World Series, hitting .305 in Series play. He was the 1960 World Series MVP. He had the only 6-RBI World Series game in the 20th Century; Hideki Matsui became the second ever 49 years after Richardson and Albert Pujols was the third 51 years later.

An overall ordinary hitter with a fairly weak OBP, the slick-fielding Richarson was named to All-Star teams in seven seasons and came close to being regular-season MVP in 1962, when he finished second behind teammate Mickey Mantle. He was a five-time Gold Glover. Curiously, he retired from baseball at the young age of 30.

His grand-nephew J.T. Wise has played in the minors.