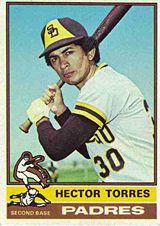 In 1958, Héctor Torres helped pitch the Monterrey team to a Little League World Series title, just the second ever by a non-U.S. team (Monterrey had also won in 1957).

Torres signed with the San Francisco Giants in 1962 but hit under .200 his first two years in the minor leagues. In 1964 he improved to .223 for the Fresno Giants with 18 homers. After two years (1966-1967) with the Seattle Angels and a trade, Torres was called up to the Houston Astros in 1968. After one year, in which he made the Topps All-Star Rookie Team ,he lost the job as the Astros' regular shortstop to Denis Menke and was shuffled around the majors over the next decade before finishing his career in the minors in 1978 with the Syracuse Chiefs. Never a significant offensive producer, Torres was known mostly as a slick fielding shortstop and a versatile player who could play almost anywhere on the field (he even pitched one game for the Montreal Expos in 1972). When MLB added two teams for the 1977 season, the Toronto Blue Jays chose Torres in the expansion draft and he played with the Jays in their inaugural 1977 season. Torres played his final season in the Blue Jays minor league system in 1978.

After retiring, Torres stayed with the Blue Jays organization and worked as a coach and manager for many years. For some of the early years, it is unclear what role he played in the system. He reached the major leagues as a coach in 1990 and 1991.

Torres left the Blue Jays organization after the 2002 season. In 2003 he managed the AZL Brewers before becoming a hitting coach for the Hagerstown Suns in 2004. Torres split the 2005 season between Mexico and the United States. He began the year by managing the Monterrey Sultans but was let go when the team was in first place in the northern division. Team officials had been critical of Torres' use of the pitching staff. After he was dismissed, the team slipped out of first. In early June Torres returned to the U.S. and became the hitting coach for the Montgomery Biscuits. He has coached in the Tampa Bay Rays system ever since.

Torres is the son of Mexican League star Epitacio Torres