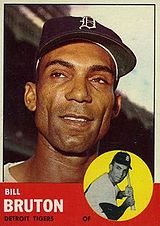 "Eight years older than Henry, William Haron Burton was born November 9, 1925 in Panola, Alabama, on the outskirts of Birmingham. Unlike most of his teammates, including Henry, for whom baseball was the only destination, Bruton saw baseball as a vehicle that could provide greater opportunities and acceptance for him off of the field, opportunities not yet existing for blacks. As an adolescent, he moved to Wilmington, Delaware, with the childhood dream of becoming a chemist, but he would later say that he chose baseball because he believed that chemistry was not yet a field in which a person of color could succeed." - Howard Bryant, The Last Hero: A Life of Henry Aaron

“Bruton is the best player I’ve ever seen retire. Usually, you have to cut the uniform off a guy to make him quit. Billy can still run and throw and hit the ball.” - Rick Ferrell, The Sporting News, November 21, 1964

Center fielder Bill Bruton played twelve seasons in the majors, leading the league three times in stolen bases, twice in triples, and once in runs scored.

When Bruton began in organized ball, in 1950, his age was provided as 20 because it was thought there would be no interest in him at his actual age, 24. He was nearly 28 when he finally reached the big leagues with the newly-minted Milwaukee Braves in 1953. Bruton led the National League in stolen bases in each of his first three seasons, building a reputation as both a great fielder and base runner with his speed. He was a key component of the Braves championship teams in the 1950s, routinely hitting in the .270s and .280s range. Though he missed the 1957 World Series victory due to a knee injury following a collision with Felix Mantilla in July, he shone in the 1958 Fall Classic, batting .412/.545/.588 when the Braves fell in seven. On August 2, 1959, he hit two triples with the bases loaded, becoming the second man (after Elmer Valo) to turn the feat. He led the NL in runs scored (112) and triples (13) in 1960, his last season in Milwaukee. Moving to the Detroit Tigers, Bill slugged 33 home runs in his first two seasons in the Motor City, retiring after the 1964 season.

Upon his retirement, Billy revealed the dirty little secret about his playing age versus his actual age. He played 1,610 games in the bigs with a .273/.328/.393 slash line, 973 runs scored and 1,651 hits in twelve seasons. He took a job with Chrysler on his retirement, working in all manner of departments. When he retired in 1988, he was a special assistant to Lee Iacocca.

Bruton died in 1995 of an apparent heart attack. Both The Baseball Necrology and Biographical Encyclopedia of Baseball report that he was in the Army during World War II before beginning his baseball career. His brother, Jack, played in the Negro Leagues.