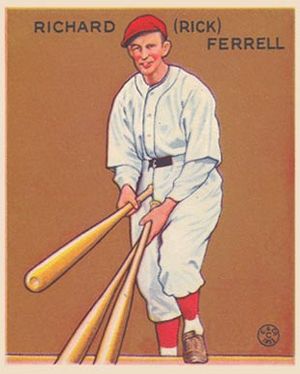 Hall of Fame Catcher Rick Ferrell was the brother of major league pitcher Wes Ferrell and minor leaguers George Ferrell and Marvin Ferrell. In fact, there were seven brothers in the family, all of whom played baseball, and the six others were pitchers; Ferrell caught them all. There was also, a cousin, Beverley "Red" Ferrell, who played minor league ball from 1934 to 1941. Many people are convinced that the wrong one of the two major league brothers was inducted into Cooperstown.

The other side of the argument, though, is that Ferrell set the record for the most games caught by an American League catcher, a record which stood for several decades. He was strong on defense and was better than most catchers on offense. The eight All-Star Games that he was named to testify that he was seen as a big star in his own time (the first All-Star Game happened when he was already in mid-career or he might have been named to more). After his playing days were over, he spent forty years as a scout and baseball executive.

As of 2007, Ferrell has the 5th most passed balls in the modern era, 142. This was the result of having to catch a number of knuckleball pitchers during his long career.