Note: This page is for 1980s major leaguer Pedro Guerrero; for the coach in the 2010s, click here. 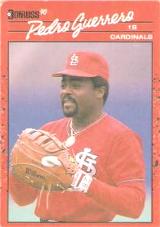 "The best hitter God has made in a long time." - Bill James

He was first signed by the Cleveland Indians and scout Reggie Otero, in 1973, out of San Pedro de Macoris. He played one season in the Gulf Coast League, then just as the 1974 season was about to start, he was traded to the Los Angeles Dodgers for major league-ready pitcher Bruce Ellingsen. It was an unusual trade for the time, but Otero had moved to the Dodgers' organization in the meantime and had nothing but glowing praise for his young protégé, prompting GM Al Campanis to ask for his services instead of a player closer to the major leagues. The Dodgers were patient with him, letting him develop in the minors before bringing him up for the first time late in the 1978 season. He played a bit more in 1979, was a utility player in 1980 and was finally made a regular in 1981.

When the Dodgers tried to move him to third base (something they have tried to do to many outfielders in team history), his range factor at third was decent but the Dodgers apparently felt he made too many errors. Whatever the numbers say, he could never shake off a reputation as an atrocious fielder, both in the outfield and at third base, which is partly why he ended his career as a first baseman. In fact, he had played a lot of infield in the minors, including some time at second base early in his major league career, so trying him at third base was not too far-fetched.

In a classic (and probably apocryphal) tale, manager Tommy Lasorda was talking to Guerrero about how to field third base at a time when Steve Sax was having his problems at second base - and it went something like this:

He was third in the MVP voting three times - twice with the Dodgers and once with the St. Louis Cardinals. He was World Series co-MVP in 1981, when the Dodgers won the World Series. He was also a key member of the division-winning Dodger teams in 1983 and 1985, and was part of the 1988 Dodgers who went on to win the World Series until he was traded to the Cardinals in mid-season (for pitcher John Tudor); at the time he was hitting .298 with a good on-base percentage but not much power. After the 1983 season, he was signed to a 5-year, $7 million contract, which was the largest in team history at that time.

His career, which seemed to be on a Hall of Fame track, was derailed in 1986, when he ruptured a tendon in his knee on the final day of spring training, on April 3rd. The injury cost him all but a month of the season, and reduced his mobility as well. That made him a liability in the outfield, and when the Dodgers signed free agent Kirk Gibson before the 1988 season, he had to give up his spot in left field and move back to third base. As the Dodgers' biggest established star, he clashed with the brash Gibson, who was having an MVP season. The Dodgers had to choose between the two, and when an opportunity presented itself to acquire pitcher John Tudor, they sent Guerrero to St. Louis.

After all the moving around from position to position with the Dodgers, Pedro found a regular spot with the Cards, playing first base and playing every day. He had a great season in 1989, with 49 doubles, 117 RBI and a .311 batting average, but after being the National League's top team in the 1980s, the Cardinals were in a decline phase, and his bat could not reverse the trend. Age then began to get the better of him as his playing time and batting average declined each of the three following seasons. After hitting .219 in 43 games in 1992 he became a free agent, and finding no interest in his services given his declining production at age 36, he had to settle for playing in the minor leagues.

He was acquitted of drug charges in 2000.

The two most similar players through 2014, according to the similarity scores method, are Mike Sweeney and Rico Carty, although Pedro has a higher Adjusted OPS+ than either of them.

Guerrero's half-brother, Domingo Michel, was a minor league and CPBL outfielder from 1984-1999 and coached for the DSL White Sox in 2010.

He managed the Vallejo Admirals to begin the 2013 Pacific Association season, but was replaced by Tito Fuentes, Jr. partway through the year. In February of 2015, he was hospitalized in the Dominican Republic because of a brain hemorrhage. He coached for the Dominican national team in the 2015 Pan American Games. In April of 2017, he suffered a brain hemorrhage in New York, NY that forced his hospitalization and left him in critical condition. The hospital had to hold a hasty press conference to address persistent rumors that he had died.

He is not to be confused with the much-younger coach for the Phillies who is also named Pedro Guerrero.