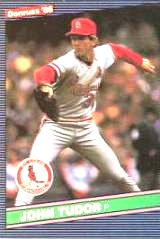 Lefty John Tudor won 117 games over a dozen years in the majors.

Selected by the New York Mets in the 1975 amateur draft, Tudor did not sign and was then chosen by the Boston Red Sox in the 1976 amateur draft. He reached the majors in 1979 and was soon a part of the Boston rotation. After winning 13 games for the club in 1982 and 1983, he was traded to the Pittsburgh Pirates for Mike Easler.

Following one year in Pittsburgh in 1984, Tudor was dealt to the St. Louis Cardinals. He started 1985 slowly, going 1-7 through May, but won 20 of his next 21 decisions. He ended the year with a 1.93 ERA, finished second to Dwight Gooden in NL Cy Young Award voting, and led the National League with 10 shutouts; he is the last major leaguer to record double figures in shutouts (the only other men to throw at least 10 in a season since World War II are Bob Gibson, Sandy Koufax, Dean Chance, Juan Marichal, Bob Feller, and Jim Palmer). His team reached the World Series that year, and he recorded the wins in Game 1 and Game 4 before taking the loss in Game 7 against the Kansas City Royals.

During the 1988 season, Tudor was traded to the Los Angeles Dodgers for Pedro Guerrero. He missed most of 1989 with injuries but returned to St. Louis in 1990 and posted a 12-4 record. He retired after that season.