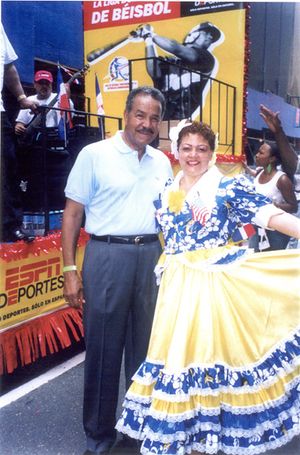 Photo of Marichal later in life

"This guy is a natural. He's got ideas about what he wants to do and he goes and does it. He amazes me." - Carl Hubbell

Hall of Fame pitcher Juan Marichal starred for the San Francisco Giants for more than a decade. His trademark was his high leg kick, great control and vast assortment of pitches released anywhere from overhand to sidearm.

Signed by the New York Giants before the 1957 season, Marichal burst into the Major Leagues by pitching a one-hitter with 12 strikeouts against the Philadelphia Phillies in his first game on July 19, 1960. From 1963 to 1969, he won 20 or more games in six of seven seasons and was the winningest pitcher in baseball during that span. He led the National League with 25 wins in 1963 and 26 victories in 1968 and also hurled a no-hitter against the Houston Colt .45s on June 15, 1963. He later pitched one year with the Boston Red Sox, in 1974, and concluded his career with the Giants' rivals, the Los Angeles Dodgers in 1975.

Since the inception of the Cy Young Award in 1956, Marichal has been perhaps the unluckiest pitcher in the quest for pitching's top honor. He won at least 25 games three times but never won the Award. He lost out to Sandy Koufax in 1963 and 1966 and then to Bob Gibson in 1968. Because of their outstanding seasons, each time his rival not only won the award but was the unanimous selection in the voting.

In a 1965 game against the Dodgers, Marichal clubbed Dodger catcher Johnny Roseboro on the head with his bat. The altercation was one of the most publicized baseball events of the 1960s, and Marichal was suspended for nine days and fined $1,750, a record amount at the time. Ironically, many years later the two became friends. Worried about the lingering impact of the incident hurting his Hall of Fame chances, Marichal asked Roseboro to issue a statement about bygones being bygones, and Roseboro graciously complied.

His 243 career wins were the most by a pitcher born in the Dominican Republic until he was tied by Bartolo Colon in 2018.

Marichal was elected to the Baseball Hall of Fame on January 12, 1983 by the Baseball Writers Association of America. Starting in 1983, Marichal was a scout for the Oakland A's. In 1996, he was named the Dominican Republic's Minister of Sports in the cabinet of President Leonel Fernandez.

Marichal is the father-in-law of Jose Rijo and cousin of Jose Acevedo.