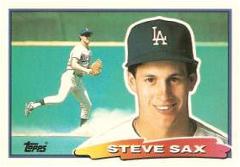 Steve Sax, a second baseman who had a 14-year career in the big leagues, had a high-visibility career due to playing 13 of his seasons in the biggest cities - New York, Los Angeles, and Chicago.

He was the 1982 National League Rookie of the Year Award winner, a five-time All-Star, and appeared on two World Series winners in 1981 and 1988.

His brother Dave Sax was a teammate in the minors and on the Los Angeles Dodgers.

Sax was born in Sacramento, CA, and went to high school there. He was signed as a 9th round pick in the 1978 amateur draft by the Los Angeles Dodgers and scout Ronnie King. Sax came out of an oddly talented 9th round draft class, a class which included major leaguers Charlie Leibrandt, Charlie Lea and Tony Fossas.

He spent 1978-1981 in the minors, before coming up for 31 games with the Dodgers in late 1981. Moving his way up the Dodger minor league organization, he was with the Lethbridge Dodgers, Clinton Dodgers, Vero Beach Dodgers, and San Antonio Dodgers, hitting between .283 and .346, with little power but stealing more bases each year as he got older.

In 1981, he broke in with a .277 batting average, and showed good range in the field. He took part in all three post-season series the Dodgers played in that year as a back-up infielder. 36-year-old Davey Lopes was the second baseman at the time, but the Dodgers traded him after the season, making room for Sax to become the starter at second base.

In terms of offensive statistics, though, his most notable accomplishment was 444 stolen bases, with a peak of 56 in 1983. That 1983 season is notable in that Sax is the only player since 1920 to steal less than 90 bases and get caught more than 30 times in a season. His 444 steals put him in the top 50 on the all-time list at the time of his retirement. In spite of that, he never once scored 100 runs in a season.

He was one of the few mainstays of the Dodgers who were on both the winning 1981 and 1988 teams, along with Mike Scioscia, Mike Marshall, Alejandro Pena, and Pedro Guerrero (who was traded in mid-season of 1988, though). He experienced a well-publicized bout of defensive ineffectiveness in 1983, when he made numerous errors on routine throws to first base. He committed 30 errors that season, easily a career-high. It was often described as a psychological problem, but after a while he seemed to master the problem and was fine again. For the rest of his career, his defensive play was correct, although his strength was always his bat. Another strange blip in his record appears between the 1985 and 1986 seasons: in 1985, he hit only 8 doubles in 488 at-bats, an extremely low total for a regular player; the next year, he hit 43, the second-most in the National League...

With the Yankees, White Sox, and Athletics[edit]

Sax became a free agent after the 1988 season and signed with the Yankees; he played well with them, stealing a lot of bases and hitting over .300 twice. He made the All-Star team in both 1989 and 1990 as a member of the Yankees. By the time he joined the Chicago White Sox and Oakland Athletics late in his career, he wasn't hitting much anymore. With the White Sox, he played on the 1993 division-winning team, when Frank Thomas won the MVP Award. The White Sox used him as an outfielder and DH, with only one appearance at second base during the season.

The similarity scores method shows the most similar player to Sax as Jim Gantner, a contemporary, and another similar player is Hall of Fame second baseman Johnny Evers, who played in a completely different era, however.

Sax has done a number of things after baseball. He entered politics to run for a seat in the California Assembly, but dropped out. He worked as a baseball analyst. He then owned a martial arts studio and worked as a financial consultant to athletes and others (as of 2005). In 2013, he was named the first base coach of the Arizona Diamondbacks, working under his former teammate with the Dodgers, manager Kirk Gibson, but stayed only a year in the position.