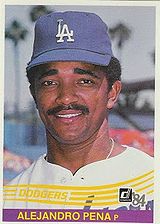 Alejandro Pena pitched 15 seasons in the big leagues and is best known for winning the ERA championship in the 1984 National League. He had only two seasons in which he was primarily a starter, ending up with 74 saves in his major league career. However, both of his seasons as a starter were years when his ERA was under 3.00.