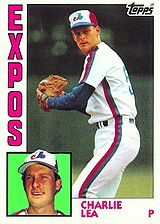 Charlie Lea is one of the few major league players who was born in France, where his father was assigned while serving in the U.S. military. He grew up in Memphis, TN and attended the University of Memphis. Drafted by the Montreal Expos in the 9th round of the 1978 amateur draft, he broke in with the same city where he had played collegiate ball. For the Memphis Chicks of the Double A Southern League, Lea went 3-3 with a 3.57 ERA, a fine debut for a pitcher fresh out of college at that level. The next year, 1979, he went 8-8 with a 4.39 ERA for Memphis.

In his third year in Memphis, Charlie put it all together, throwing three shutouts and seven complete games in 9 starts. He allowed only 34 hits in 75 innings, striking out 54, walking 21 and allowing no homers. He went 9-0 with a 0.84 ERA. He was promoted to the legendary 1980 Denver Bears but pitched only two games for the team, recording a 1.50 ERA with no decisions, before he was called up to Montreal for an emergency start on June 12, 1980. He won that game and pitched well enough to stay with the team for the remainder of the season, compiling a creditable 7-5 record as a rookie as the Expos lost the NL East pennant to the Philadelphia Phillies on the season's last weekend.

In 1981, when the Expos won the second half of the strike-shortened season, he was 5-4. This includes a record of 4-0 with an ERA of 0.25 and NL Pitcher of the Month honors for May, and 1-4 with an appalling ERA the rest of his season, which was cut short by arm maladies. On May 10th, he pitched a no-hitter against the San Francisco Giants, the first no-hitter ever pitched at Stade Olympique. Lea missed the 1981 post-season and the first weeks of the 1982 season with arm problems, but came back strong afterwards, posting a 12-10 record. He followed that with an outstanding season in 1983 when he was 16-11, combining with Steve Rogers and Bill Gullickson to give the Expos the best starting threesome in the league; unfortunately, the back end of the staff was very weak, leaving the team once again short of the pennant.

By 1984, Lea was considered the team's ace, as Rogers started the season on the disabled list then was ineffective when he came back. For his part, Lea was pitching lights out, and by midseason was 13-4. This earned him the berth as the 1984 All-Star Game's starting pitcher. He won the game, but was a victim of a lack of offensive support in the second half of the season, and his record was 15-10 when he was shut down in early September with what was originally diagnosed as a muscle strain in his back. When he arrived in spring training in 1985, the team's brass realized that the injury was in fact much more serious than originally thought. He would miss the entire 1985 and 1986 seasons because of this shoulder problem.

In 1987, he began a comeback with the West Palm Beach Expos of the Florida State League, for whom he went 2-6 with a 3.68 ERA; he was then promoted to the Triple A Indianapolis Indians, posting a 1-2 record with a 4.44 ERA. It was pretty clear that he was not yet back to full strength, but the Expos still called him up in September 1987 and gave him one start. He was beaten up by the New York Mets, giving up four runs in an inning and showing little command; with the Expos in a pennant race, he remained on the sidelines the rest of the month. After the season, he signed as a free agent with the Minnesota Twins, who had won the 1987 World Series in spite of having only two reliable starting pitchers, Frank Viola and Bert Blyleven. Lea gave the Twins some good innings at the back end of the starting rotation in 1988, finishing the year 7-7, 4.85 in 23 starts. The Twins actually posted a better record than in their championship season, but finished second in the division. Lea could have returned for the 1989 season, but chose to retire instead, realizing that he would never return to the quality pitcher he had been in Montreal.

Because his career was cut short by injuries just as he was being recognized as one of baseball's best starting pitchers, Charlie Lea has been largely forgotten. However, from 1980 to 1984, he was a key member of one of baseball's best pitching staffs and probably the Montreal Expos' most consistent pitcher over the period. After his career, he was a radio commentator for the Triple A Memphis Redbirds.

Lea was discovered by police in his home near Memphis on November 11, 2011, dead at age 54 of an apparent heart attack.