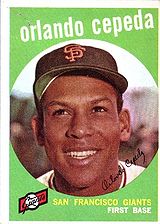 "He’s annoying every pitcher in the league. He is strong, can hit both ways and makes all the plays real good." - Willie Mays

"He was the toughest hitter I ever faced." - Lew Burdette 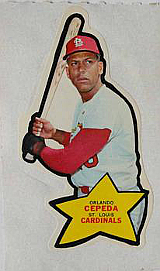 Orlando Cepeda hit .297/.350/.499 with 379 home runs during a 17-year career, numbers that earned him a long overdue spot in the Hall of Fame in 1999, being voted in by the Veterans Committee. He had nine seasons when he batted .300 or better, and eight seasons belting 25 or more homers. During his career, he won Rookie of the Year and MVP awards and was a seven-time All-Star.

The son of Puerto Rican baseball icon Pedro Cepeda (who was nicknamed "Perucho" and "the Bull"), Orlando was later known as "Peruchin" and "the Baby Bull". Signed by the New York Giants as a 17-year-old in 1955, he spent his entire signing bonus on his father's funeral when he passed away that April. He hit .393 with 21 home runs for the Kokomo Giants that summer, and the following year, 1956, won the Northern League Triple Crown while playing for the St. Cloud Rox.

During his time in San Francisco, the Giants had a problem few teams have had in history. At first base, the club was blessed with two natural first basemen who were both among the greatest hitters to ever play the position - and only one first base to play them at: Hall of Famer Cepeda... and Hall of Famer Willie McCovey, who debuted in 1959 and displayed amazing power. If one manned first base, the other's bat was simply too potent to not play. With no designated hitter, that meant one man had to play the outfield - poorly - if both were to be in the lineup at the same time. To make things worse, the Giants were coming up with outfielders by the bushel-load at the time, with future All-Stars such as Leon Wagner and the brothers Matty and Felipe Alou (as well as kid brother Jesus, another strong though not All-Star player) hoping to see action. All this star power plus playing with only one way to reach the postseason, a pennant, made it even less appealing for managers to play someone who was a defensive liability in the outfield. With this perfect storm having brewed, Cepeda struggled with injuries in 1965, hitting just .176/.222/.294 in 33 games while missing most of the year. By that time, McCovey had replaced him at first base, and early in the next season, Cepeda was traded to the St. Louis Cardinals for Ray Sadecki. This is now remembered as a very uneven trade, but Sadecki was a young lefthander who had won 20 games as recently as 1964, even if he was also coming off a couple of poor seasons, and he would pitch in the majors for another decade, so he was not a complete nonentity.

Cepeda almost immediately returned to form, hitting .303/.362/.439 in 123 games for St. Louis over the rest of the 1966 season. He had perhaps his finest season in 1967; in a year dominated by strong pitching, he led St. Louis, a team not expected to compete, to the postseason with a .325/.399/.524 line, 25 homers, 91 runs scored and 111 RBI. He unanimously earned NL Most Valuable Player honors that year, one of only four men (Cepeda, Albert Pujols, Frank Robinson and Mike Trout to win ROY and MVP honors in their career. The Cardinals went on to beat the "Impossible Dream" Boston Red Sox in the World Series, though Cepeda's bat fell quiet in the victory. He hit just .248/.306/.378 in 1968, "The Year of the Pitcher", and added a .250/.300/.464 line and 2 home runs as the Cardinals returned to the World Seriesand fell to the Detroit Tigers. After the season, he was dealt to the Atlanta Braves for Joe Torre.

Orlando had two more solid seasons as a regular in Atlanta, including batting .305/.365/.543 with 34 home runs and 111 RBI in a resurgent 1970 season. His knees began to falter in 1971, playing only 71 games (but belting an impressive 14 home runs in that limited time) before season-ending surgery in September. He played in great pain for 28 games in 1972 before being dealt to the Oakland A's. The pain in his knees only allowed him to play 3 more games before another surgery; when threatened by a Charlie Finley telegram to return to the club or be released, Orlando did not answer, figuring he would retire. He was coaxed into playing in 1973 by the Boston Red Sox, who asked if he would be willing to be their exclusive designated hitter, a position new to the AL. Orlando was freed from the necessity to play in the field, the first man in history to be signed as a full-time DH, and flourished, hitting .289/.350/.444 with 20 home runs. This created the still-persisting legend that the DH was a chance for star players to extend their careers, even if cases like his have been few and far between in the half-century that followed that inaugural season. He spent the first half of 1974 in the Mexican League, returning with the Kansas City Royals for 33 games before retiring.

About a year after his playing days ended, Cepeda was arrested at the San Juan airport with more than 150 pounds of marijuana in his car. He served 10 months in prison, although this turned out to be just an unfortunate blip in his life. He returned to baseball as a Chicago White Sox coach in 1980, and later worked in the Giants organization. Away from the diamond, he continued to be recognized for charity work and humanitarian efforts. Cepeda lived and played in a time when the United States was at a crossroads of social change and racial intolerance. He was often the target of racial slurs, but the tough Cepeda always managed to remain proud and be a spokesperson and pioneer for Hispanic players everywhere. However, it is clear that the jail sentence kept him from being elected to the Hall of Fame by the BBWAA, despite his impeccable numbers.

Cepeda was inducted into the Hall of Fame in 1999, when the Veterans Committee elected him, becoming the second native Puerto Rican to join the Baseball Hall of Fame (after Roberto Clemente). During his induction, he said: "I'm proud to be a Puerto Rican and I will be a role model to the people of my country". Orlando became the seventh Hispanic and only living Puerto Rican in the National Baseball Hall of Fame (Luis Aparicio, Rod Carew, fellow Puerto Rican Clemente, Martin Dihigo and Juan Marichal were the other Hispanic players in the Hall at the time). He and Albert Pujols are the only two players in NL history to win both the Rookie of the Year Award and the Most Valuable Player Awards unanimously. His number 30 was retired by the Giants in 1999 and a statue in his likeness was erected outside AT&T Park.

On February 19, 2018, Cepeda was hospitalized in the San Francisco area after suffering an apparent heart attack and was listed in critical condition. He managed to overcome the critical stage and, within a few days, was showing major signs of improvement.

Cepeda is the uncle of professional boxer Ricardo Cepeda.