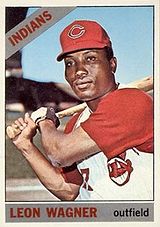 Leon Wagner (Daddy Wags) was the first big hitting star of the expansion Los Angeles Angels, whom he joined in 1961. He had broken in with the 1958 San Francisco Giants, hitting .317 and slugging .534, but he had to compete for playing time in the late 1950s with other youngsters such as Orlando Cepeda, Willie McCovey and Felipe Alou.

Prior to playing in the majors, he played on the All-Army Champion Team with J.C. Hartman, Willie Kirkland and music star Charley Pride.

In the 1970s he appeared in a couple of movies - A Woman Under the Influence by director John Cassavetes, and The Bingo Long Traveling All-Stars.

After baseball he owned a clothing store, but he eventually ended up homeless. He built a shed to live in, and died there in 2004.