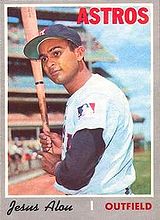 Part of one of the great baseball families of all-time, outfielder Jesus Alou played 15 years in the majors.

The younger brother of big leaguers Felipe Alou and Matty Alou, Jesús followed his brothers' career path and was signed by San Francisco Giants scouts Frank Genovese and Horacio Martinez in late 1958. Originally a pitcher, he gave up 11 earned runs in just 5 innings in his first pro season with the Hastings Giants in 1959 but did go 2-for-3 at the plate. After an arm injury, Artesia Giants manager George Genovese (scout Frank's brother) moved him to the outfield in 1960, and he responded by hitting .352 with 11 home runs. Alou moved up to the Eugene Emeralds of the Northwest League in 1961, hitting .336 and leading the circuit with 174 hits.

After hitting .343 for the El Paso Sun Kings in 1962 and .324 with the Tacoma Giants in 1963, he was called up to the majors, joining his brothers on the San Francisco team. He made his big league debut on September 10th against the New York Mets; in the eighth inning of that game, all three brothers were retired in order by pitcher Carl Willey. Five days later, facing the Pittsburgh Pirates, the Alous played together in the outfield for two innings. Overall, he hit .250 in 16 games that September.

Felipe was traded away prior to the 1964 season, but Jesús soon became the Giants regular right fielder, hitting .274 in his rookie campaign. Facing the Chicago Cubs on July 10th of that year, he had the best game of his career, going 6-for-6 with a home run and recording a hit off of each of the six different Cubs pitchers in the game. He improved to a .298 average and a career-high 9 homers in 1965 but dipped to .259 with just one home run in 1966 and spent two weeks of that summer back in the minors.

After two more years in San Francisco, Alou was selected by the Montreal Expos in the expansion draft in late 1968; Montreal in turn traded him to the Houston Astros. He struggled in his first season in Houston, hitting just .248 and missing six weeks following a scary collision with teammate Hector Torres which resulted in a concussion and a broken jaw. He bounced back in 1970, posting a .306 batting average along with 27 doubles. Seeing decreased playing time for the Astros, Alou's contract was purchased by the Oakland Athletics in the middle of the 1973 season. In 36 games that summer, he hit a robust .306. When outfielder Bill North went down with an injury, Alou went on to play in all 7 games of the 1973 World Series, going 3-for-20 with 3 RBI as Oakland defeated the New York Mets. He hit .268 the next year in a reserve role but made just two plate appearances in the postseason as the A's repeated as World Champs.

Alou was released by the Athletics prior to the 1975 season and soon hooked on with the New York Mets. He got into 62 games, primarily as a pinch hitter, recording a .265 average while notching 14 pinch hits. Let go by the Mets the following spring, he was away from baseball for two years before returning to the Astros in 1978. After two seasons away from the game, he posted an impressive .324 average in 77 games. He played 42 games in 1979 in what would be his final season; he also served as Houston's hitting coach that summer.

After his playing days, Alou was a scout for the Expos from 1983 into the 1990s. He has been the director of the Boston Red Sox Dominican academy since 2002.

Alou's paternal surname is actually Rojas. Early in his playing career, Felipe was incorrectly called by his mother's name, Alou. The error went uncorrected, and when his brothers and sons began their pro careers, they used the Alou name as well. During his playing days, Jesús also earned the nickname "Jay" from some broadcasters and writers who were uncomfortable with using his real first name.

In addition to his brothers, Alou is also the cousin of major league pitcher José Sosa, uncle of major league outfielder Moises Alou and big league pitcher Mel Rojas, as well as minor leaguers Jose Alou, Felipe Alou Jr., and Francisco Rojas. Jesús, Felipe, and Matty each played at least 15 seasons in the majors, and Moises played in 17.