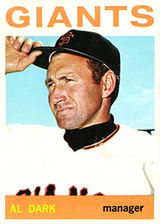 He batted above .400 in each of two World Series with the New York Giants. He won the Lou Gehrig Award in 1955, the first year it was given out.

A five-sport star in college, he was at Louisiana State University beginning in 1941 and later as a service trainee appeared at quarterback for Southwestern Louisiana (known now as University of Louisiana at Lafayette) in the Oil Bowl in 1944. He served in the military during World War II. Signed in 1946 by the Braves at the age of 24, he made a brief debut that year but spent 1947 in the minors with the Milwaukee Brewers, hitting .303. It was his only year in the minors.

Dark hit .322 in his rookie year, in 1948, and was far ahead of the other contenders for the Rookie of the Year Award. He was also #3 in the 1948 National League MVP voting. The Braves went to the World Series that year, but he hit only .167 as they lost in 6 games to the Cleveland Indians.

After the 1949 season he was traded to the New York Giants in a six-player trade that involved Sid Gordon coming to the Braves.

Dark was a teammate of Warren Spahn on the Braves, Willie Mays on the Giants, Stan Musial on the St. Louis Cardinals and Ernie Banks on the Chicago Cubs.

After his playing career ended, he took over as manager of the San Francisco Giants in 1961 and led the team to the 1962 World Series. That was where he earned his nickname "Swamp Fox", when he tried flooding the basepaths at Candlestick Park in order to impede the fast baserunners of the Los Angeles Dodgers. After four years at the helm of the Giants, he was a Chicago Cubs coach in 1965.

In 1966, he took over as skipper of the Kansas City Athletics, a position he held for almost two seasons. In 1968, Dark became manager of the Cleveland Indians, and the next season he was given the title of the team's General Manager as well. He was fired from both posts in 1971.

In 1974, he was named manager of the Oakland Athletics, replacing Dick Williams who had quit in disgust over owner Charles Finley's shenanigans after winning the 1973 World Series. Dark took the club back to the World Series in his first year with them, beating the Los Angeles Dodgers in five games. He remained with the A's through 1975, winning a second division title that year.

Dark began the 1977 season as part of the Cubs coaching staff and ended the year as the San Diego Padres manager. He was then fired in the middle of spring training in 1978, only the second manager fired under such circumstances (Phil Cavarretta had been the first, in 1954). Padres GM Bob Fontaine cited a "communications problem" to justify the firing; he was replaced by Roger Craig, who guided the Padres to their first ever winning season that year. Dark later worked in the Chicago White Sox front office in the mid-1980s.