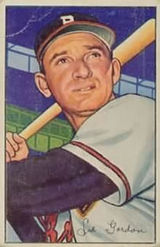 Sid Gordon's best years were after the age of 30. He found power and continued to hit for a decent average. Gordon played 13 years in the bigs, and missed some time due to World War II.

Gordon was called by one manager "a modest and quiet productive power hitter who was a dream to manage." Sid played in over 900 games in the outfield and another 450 plus at third base. He was a popular Brooklyn-born New York Giant of the late 1940s.

Gordon attended Tilden High School in Brooklyn. He got a tryout with the Brooklyn Dodgers shortly after high school graduation; Casey Stengel was impressed but did not sign Gordon at the time. Gordon would drive a coal truck for deliveries for his father's coal company during the summers. He later attended Long Island University, Brooklyn Campus. He was playing second base in sandlot contests when New York Giants scout George Mack discovered and signed him. Gordon's father Morris died before Sid made it to the minors and the younger Gordon initially wanted to stay in New York to help his mother run the family coal business. She told him to try his hand at baseball instead.

Gordon was initially assigned to the Milford Giants and hit .352/~.449/.621 with 25 homers in his pro debut in 1938. He drove in seven runs with two homers in one game and led the Eastern Shore League in batting average, OBP, hits (135), triples (9) and total bases (256). Gordon was third in homers. He lost the slugging title to Henry Schluter, who also beat him out for league All-Star honors at third base. He fielded .923, about league average at third base, a position he had not played before that season.

That kind of all-around performance earned him a late-season look at the majors at age 24. He hit .258/.378/.355 in 9 games for the 1941 Giants, playing primarily center field. Gordon tripled off Art Johnson in his first at-bat in The Show and tripled later in the game. Gordon was one of four Jewish players in the Giants starting lineup that day, alongside OF Morrie Arnovich, C Harry Danning and P Harry Feldman.

A regular role in the majors[edit]

He entered the Coast Guard in October 1943, playing service ball and was discharged in January 1946.

Sid then hit a career-high 30 homers and scored a career-high 100 runs while driving in 107 runs in 1948. He was a regular third baseman in the majors for the first time after being primarily an outfielder in 1946-1947. New York's rival, Brooklyn, held a "Sid Gordon Day" in his honor that season, a rare instance of a team honoring a player from their primary foe. He homered twice that day. He finished the season with a batting line of .299/.390/.537 for a 148 OPS+. He was chosen for the 1948 All-Star Game but did not play. He finished the season 8th in the 1948 NL in average, 9th in OBP, third in slugging (behind Stan Musial and Johnny Mize), third in OPS (behind Musial and Mize), was 6th in runs, 6th in total bases (280), tied Del Ennis for 5th in home runs, was 4th in RBI (trailing Musial, Mize and Ralph Kiner), was 9th in walks (74) and tied for 9th in steals (8). He ranked 4th in voting for the 1948 National League MVP behind Musial, Johnny Sain and Alvin Dark. He would get MVP votes each of the next four seasons, but never again make the top 10.

Gordon credited his 1948 power surge to four changes coach Red Kress made to his batting stance.

At age 32, Gordon hit .284/.404/.505 for a 142 OPS+ as the main New York third baseman. He scored 87, drove in 90 and hit 26 home runs. He made the All-Star team and saw some action in the 1949 All-Star Game, replacing Eddie Kazak at third base to open the 4th inning. He threw out both Dom DiMaggio and Joe DiMaggio that inning. He doubled against Lou Brissie in the 5th inning and walked against Vic Raschi in the 7th before grounding out against Raschi in the 9th. For the season, he was 6th in the 1949 NL in OBP, 9th in slugging, 5th in OPS (behind four future Hall-of-Famers), 5th in homers, 5th in walks (a career-best 95) and first in grounding into double plays (24). In a game on July 3, 1949, he homered twice in one inning.

To make room for Hank Aaron, the Braves dealt the fading slugger to the Pittsburgh Pirates with Sam Jethroe, Curt Raydon, Larry Lasalle, Max Surkont, Fred Waters and $100,000 in return for Danny O'Connell.

Gordon hit for a career-high .306 in 1954 but only launched 12 homers. His OBP was still excellent (.405) while he slugged .435. He had a 123 OPS+, manning right field a year before Roberto Clemente would take over that role in Forbes Field.

Bill James lists Gordon as a player who may have lost a shot at the Hall of Fame due to World War II, writing "there are guys in the Hall of Fame who didn't have careers as good as Gordon's, and Sid missed two full seasons due to the war." James rated Gordon as the 49th-best left fielder in baseball history through mid-2000, right ahead of Ken Williams and Kevin Mitchell.

All three times Gordon left a team, his position was taken by a future Hall-of-Famer - Monte Irvin in New York, Hank Aaron in Milwaukee and Roberto Clemente in Pittsburgh.

Gordon became an insurance underwriter in New York. He had two sons, Michael and Richard. Michael Gordon caught for three years in the minor leagues, never advancing beyond A ball.

He died on June 17, 1975, at age 57 when he suffered a heart attack while playing softball in Central Park.