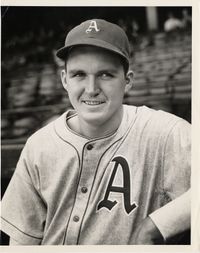 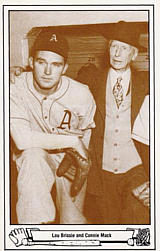 "If someone tells you that you cannot climb the mountain, you set out and find a way to do it."– Lou Brissie, quoted in Baseball Digest from June 2005

"Was Lou Brissie a hero? His characteristically modest response: 'I don’t think I am. I knew some.' - from the SABR biography of Lou Brissie [1]

Lou Brissie nearly died as a paratrooper in the US Army during World War II, but after many operations and much hard work he went on to a successful major league career pitching seven seasons and making the 1949 American League All-Star team. Overall, he was 44-48 with 29 saves in the majors. He later worked as a scout as well as for the American Legion and the state of South Carolina. Brissie is a member of the South Atlantic League Hall of Fame and also has been honored by the Hall of Fame and by the Governor of South Carolina.

Brissie never played baseball in high school, but he did play with a local textile league team beginning at age 14. As soon as he graduated from high school, he was given a pro contract by the Philadelphia Athletics manager Connie Mack. He was offered a contract with a $25,000 bonus to play for the Brooklyn Dodgers, but turned it down before signing with the A's.

Mack agreed to send the southpaw to Presbyterian College for three years. [2] He was scheduled to report for spring training with the A's in 1943, but he enlisted in the Army in December 1942. He lost a brother in the war and decided to enlist himself. [3]

Brissie was a paratrooper corporal in World War II. [4] He played with a semipro textile team in Greenville, SC during 1944 (where he was stationed for basic training). He also pitched for his army team against other local military teams. In Italy, he led a patrol of 12 men into a battle zone and was the only survivor. Brissie suffered severe leg injuries in the war but was able to surmount them and make it to the majors. While recovering in the hospital, he received a letter from Connie Mack promising him a chance to play ball when he was ready. [5] Lou was awarded a Bronze Star and two Purple Hearts for his injuries. He was on crutches in 1945 and could not play. [6] He was still disabled in 1946, but was given a contract by Mack for 1947.

Lou joined the Savannah Indians of the South Atlantic League in '47 and won 23 games with an ERA of 1.19. Brissie was a major draw for Savannah; on nights when he would pitch, the crowds would number from 6,000 to 11,000, and fans would often be seated on the grass in the outfield. [7] 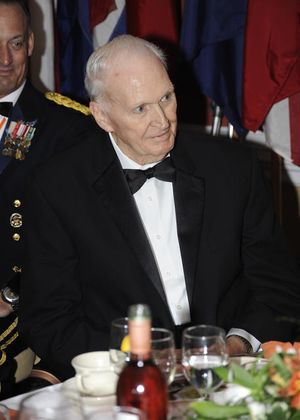 Lou debuted September 28, 1947, when he was on the mound for the A's facing the New York Yankees in their last game of the season. He went seven innings and struck out four, but his team lost, 5-3. His left leg was in a specially designed brace for the game. [8]

Brissie was 16-11 with 3 saves and a 4.28 ERA for the Athletics in 1949. He was 9th in the AL in victories, 8th in strikeouts (118), tied Coleman and Randy Gumpert for 7th in complete games (18), was 3rd in homers allowed (20), tied Scheib for 9th in walks (118) and led in earned runs allowed (109, tied with Hal Newhouser). He also batted .267. He pitched the 4th through 6th innings of the 1949 All-Star Game, won by the AL. Relieving Virgil Trucks in the 4th, Brissie gave up singles to Red Schoendienst and Stan Musial that inning but allowed neither to score. In the 5th, he came to bat against Red Munger with Yogi Berra on first and one out and promptly grounded into an inning-ending double play. In the bottom of the 5th, Lou allowed a Sid Gordon double and intentionally walked Roy Campanella but got Andy Pafko to fan to end the threat. He finally cracked in the 6th, walking Pee Wee Reese and giving up a two-run homer to Ralph Kiner. He left for pinch-hitter Vic Wertz in the top of the 7th.

He was shipped to the Cleveland Indians as part of a three-team deal on April 30, 1951; others involved in the transaction included Minnie Minoso and Gus Zernial. With the Indians, Brissie rebounded to have his best year, going 4-3 with 9 saves and a 3.20 ERA in 54 games. He allowed only 90 hits in 112 1/3 innings. His 56 games pitched were second in the AL behind Ellis Kinder. The South Carolina native was also third in saves (behind Kinder and Scheib). With the Indians in 1952, Brissie went 3-2 with 2 saves and a 3.48 ERA in 42 outings. He tied for 5th in the AL in appearances. In 1953, he wrapped up his big league career by allowing 21 hits, 13 walks and 11 runs in 13 innings; he had two saves and a 7.62 ERA for the Indians.

He hung 'em up in 1953, after the Indians sold his contract to their farm club in Indianapolis, but he never reported for duty. [9] For his career in the majors, Brissie was 44-48 with 29 saves and a 4.07 ERA in 234 games. He completed 45 of 83 starts and also batted .227. His main teammates were Eddie Joost, Ferris Fain, Sam Chapman, Elmer Valo and Hank Majeski.

After his playing days, Lou became national director for American Legion Baseball. He worked with the Legion until 1961, when he was downsized. He spent time as a scout for the Los Angeles Dodgers in 1962 and for the Milwaukee Braves in 1964. [10] He went into private industry, working in employee relations and as a company representative in Washington. His company was bought out in the early 1980s, and he then moved to the South Carolina State Board of Technical Education. He worked for the state for more than a dozen years. [11] 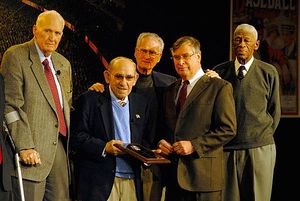 After retiring to South Carolina, Lou joined Ted Williams and others in trying to get Shoeless Joe Jackson off the restricted list and into the Hall of Fame. [13] He also spoke often at the VA, visiting the sick and injured veterans. [14]

He was awarded the "Americanism Award" by the Cooperstown Hall of Fame for his contribution to youth and baseball, and was elected to the South Atlantic League Hall of Fame in 1994. [15] He was also awarded the Order of the Palmetto (one of the two highest civilian honors awarded by the Governor of South Carolina [16]) in 1996. [17]

For the rest of his life, he suffered from pain in his leg and admitted to being in pain for over 60 years. He would pitch through the pain and would accept his fate. "You get up every day and it’s like having diabetes – which is something possibly worse, but it is a daily thing that you check and try to deal with, whatever comes up." [18]

Until his death, he was listed as "Active" on the Cleveland Indians homepage, perhaps out of respect for his abilities. See [1]

Brissie was the most recent major league player to come from Presbyterian College (as of 2019), a school that also produced Chick Galloway. The book The Corporal Was a Pitcher: The Courage of Lou Brissie appeared about him in February 2009.