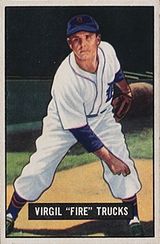 An outstanding pitcher, Virgil "Fire" Trucks won 177 games over 17 years in the majors, spent mostly with the Detroit Tigers. He won 10 or more games eleven times, and only had two losing seasons in the Bigs. He was a two-time All-Star and threw a pair of no-hitters during his career, both in the same season. Trucks and Justin Verlander are the only pitchers to throw two no-hitters for the Tigers. Ironically, three of best his years were from 1953-'55 (at ages 36-38) when he posted a combined 52 wins and 30 losses while pitching for the White Sox.

Gifted with an outstanding fastball, Trucks was signed by the Tigers and began his pro career in 1938 with the Andalusia Bulldogs of the Alabama-Florida League. He led the circuit with 25 wins and a 1.25 ERA and set a league record with 418 strikeouts. He advanced through the minors and reached the big leagues in September 1941, making one late-season relief appearance against the Chicago White Sox. He joined the Tigers' rotation in 1942 and found success right away, going 14-8 in his rookie campaign. After winning 16 games in 1943, he entered the Navy in February 1944.

After being discharged from the military in September 1945, Trucks made only one late-season appearance for Detroit that year. He did start two games in the World Series against the Chicago Cubs, however, winning Game 2 with a complete game four-hitter. He won 14 games in both 1946 and 1948, and he had one of his finest years in 1949, winning 19 games while leading the American League in strikeouts and shutouts.

Trucks put together his most unusual season in 1952, hurling a pair of no-hitters despite recording a 5-19 record. He threw the first no-no on May 15th against the Washington Senators, allowing just one base on balls (to Clyde Kluttz) while striking out 7. After going 3-13 in his next 16 decisions, he recorded his second no-hitter on August 25th, retiring the final 20 batters in a win over the New York Yankees.

Following the 1952 season, Trucks was traded to the St. Louis Browns as part of a blockbuster six-player trade. After starting the 1953 season with a 5-4 record, he was dealt to the Chicago White Sox in June and went on to win 15 games for the team, recording the only 20-win season of his career. He notched 19 wins for the Sox in 1954 while tying Mike Garcia for the AL lead with 5 shutouts.

Trucks was traded back to Detroit following the 1955 campaign. After one season with the Tigers, he was then dealt to the Kansas City Athletics. At the age of 40, he tallied 9 wins for the lowly Athletics in 1957. He ended his big league career with the Yankees in 1958 and returned to the minors for a handful of games with the Miami Marlins the next year.

After his playing days, Trucks was a Pittsburgh Pirates coach in 1963.

Trucks passed away at the age of 95 on March 23, 2013, having been admitted to hospital with pneumonia a few days earlier.